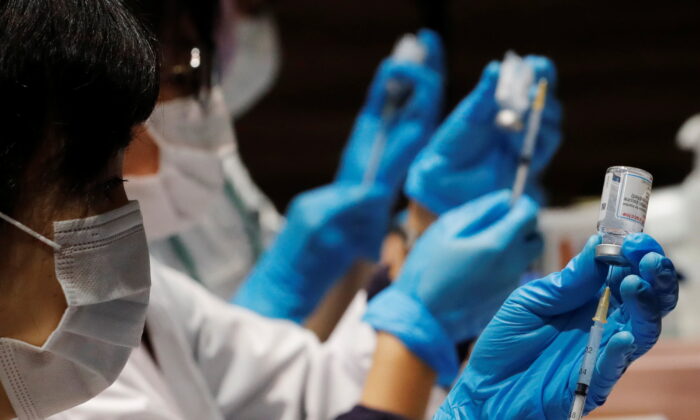 Health care workers prepare doses of a COVID-19 vaccine before administering them to staffers of Japan's supermarket group Aeon at the company's shopping mall in Chiba, Japan, on June 21, 2021. (Kim Kyung-Hoon/Reuters)
Vaccines & Safety

A Japanese health ministry committee awarded a compensation payment to the family of a woman who died after suffering an allergic response and sudden heart attack after receiving a COVID-19 vaccine.

Japan’s Ministry of Health, Labor, and Welfare said the woman was 91 when she received the shot and had preexisting health conditions including a history of transient ischemic attacks, local Japanese media reported. It’s not clear what vaccine the woman received.

After receiving the vaccine, the unnamed woman suffered a severe allergic reaction and an acute myocardial infarction before dying, the panel said.

A panel spokesperson told the Japan Times last week, in confirming the payment, that “a scientifically rigorous causal relationship is not necessary” in finding out whether the family is eligible to receive damages. The panel added that a link between the COVID-19 vaccine and the woman’s death can’t be ruled out.

The agency is slated to pay about 44.2 million yen (around $324,000) to the woman’s family, according to The Mainichi newspaper.

As of July 25, Japan’s government received 3,680 applications for damage relief in connection to the COVID-19 vaccine. The panel has decided to provide expenses and other health benefits to more than 800 people, while 62 others were denied.

Officials also said at the panel meeting that cases of 12 people who died after getting COVID-19 vaccines were evaluated, with one being “approved” and 11 others being left “pending,” the paper reported.

According to the Ministry of Health, Labor, and Welfare website, the approved COVID-19 vaccines are the ones made by Pfizer, Novavax, AstraZeneca, and Moderna. It also includes a warning that the shots have been linked to several forms of heart inflammation.

The payment comes as an increasing number of vaccine-related compensatory payments are being handed down across the world.

In June, Taiwan’s National Vaccine Injury Compensation Program awarded compensation to 10 claimants in connection to injuries or deaths related to COVID-19 vaccines. A lump sum of $116,877 was provided to the family of someone who died after receiving the shot, the government confirmed.

A UK woman became the first among a small number of people to receive compensation for injuries due to vaccines, reported the British Medical Journal in June. Vicki Spit’s 48-year-old partner, Zion, became ill several days after getting the shot before dying.

Canada’s Vaccine Injury Support Program reported that between June 1, 2021, and June 1, 2022, about 774 vaccine injury claims were received and processed. Eight of the claims were approved, meaning that they are eligible to “receive income replacement indemnities; injury indemnities; death benefits; coverage for funeral expenses; reimbursement of eligible costs such as otherwise uncovered medical expenses,” its website says.