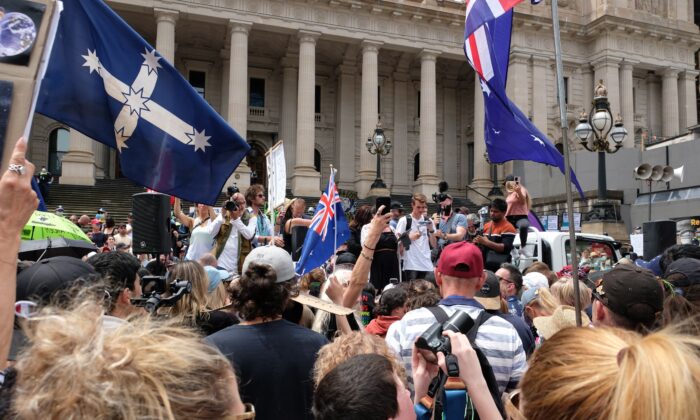 A state MP has said that the rights and freedoms of Australians have been incrementally chipped away during the COVID-19 pandemic, with the unprecedented newly proposed pandemic laws potentially giving Victorian leaders “unfettered power” over the lives of the state’s residents.

Neil Angus, the Liberal Party member for Forest Hill, says that 20 months ago—at the beginning of the pandemic—many Victorians would not have anticipated health restrictions such as curfews or limits on travel within a few kilometres of their home.

“If we had have talked about this a couple of years ago, people would have laughed at us. And yet now, we’ve had this in place for just under two years, and who knows what could be happening next,” he told The Epoch Times.

“It’s extremely concerning, and like all these things, they come incrementally and in the heat of the battle when we don’t notice it,” he said. “But when you step back and have a look, you can see how far we have gone down the path of losing our liberties, and that is very frightening.”

He noted that the Bill had finally galvanised state MPs into speaking out against government overreach during the COVID-19 pandemic, which has seen bipartisan support for public health restrictions and increased powers to authorities.

In fact, just weeks earlier, Angus was one of a handful of MPs—and the only member of Victoria’s lower house—to oppose a vaccine mandate for all parliamentary staff and MPs.

His opposition—which saw him choose to vote against the governing Labor Party and his own Liberal Party— was “all about freedoms.”

“My concern has been just the continual overreach and interference by this government into the lives and every part of the lives of all Victorians,” he said.

He noted that his speech opposing the mandate was also well received by individuals locally and from around the world.

The Victorian government is now pushing through its Pandemic Management Bill, which will establish a permanent structure for the government to manage pandemics in future.

While the Bill streamlines certain operational aspects of the government and establishes new safeguards around privacy rights, it also contains wide-ranging provisions that give the premier and health minister unprecedented power over the state.

These include “broad powers” for the health minister to make pandemic orders, on the advice of the chief health officer, where it is deemed “reasonably necessary” to “protect public health.”

The premier can also “declare a pandemic” and extend such a declaration three months at a time—the number of extensions is unlimited.

Additionally, the pandemic orders would give the premier and health minister the power to issue new public health decrees, including closing borders, lockdowns, and mask mandates.

Further, Police will receive new powers to enter private premises without a warrant to implement such decrees.

Under the Bill, health restrictions can also be categorised, and target classes of citizens, including based on vaccination status and new record penalties have been introduced—including two-year prison terms and fines of AU$90,000 for “aggravated offences” where an individual breaches a health order and is deemed to have caused a “serious risk” to the health of another.

The state opposition has vowed to repeal the Bill, while the peak legal body, the Victorian Bar, has spoken out against it.

Christopher Blanden Q.C., president of the Bar, warned it would allow “unlimited interference” in the liberties of Victoria’s residents.

“The overriding concern is that the Bill confers on the health minister what is, in a practical sense, an effectively unlimited power to rule the state by decree, for an effectively indefinite period, and without effective judicial or parliamentary oversight,” he said in an internal email to Bar members.

In recent months, Victorians have mobilised in protest against government-mandated health restrictions and powers, with opposition to the Pandemic Bill now added to the mix.

On Nov. 6, several thousand Victorians marched through the streets of Melbourne chanting the words, “Kill the Bill.”

Angus said the new Bill would ultimately change the fabric of life in Victoria.

“We’re always going to have to look out and listen out for the Premier. One day he might get up on his soapbox and make a decree about certain classes of people, certain geographical areas, and about certain things you can and can’t do,” he said.

“The freedoms that we have to take for granted for so long here in Victoria are potentially put at risk by this particular Bill. So, I think it’s going to change things dramatically here in Victoria, and for the worse,” he added.