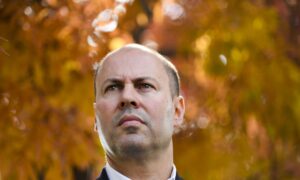 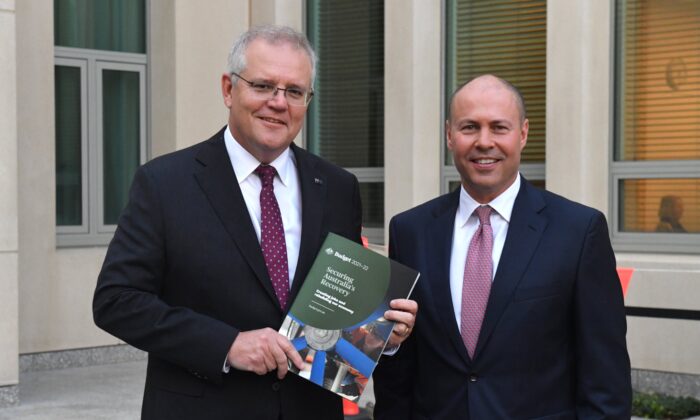 Prime Minister Scott Morrison and Treasurer Josh Frydenberg conducting interviews after Frydenberg delivered the 2021-22 Budget in the House of Representatives at Parliament House in Canberra, Australia on May 12, 2021. (AAP Image/Mick Tsikas)
Australia

COVID-19 Ushers in Era of Big Government Spending in Australia

Frydenberg has defended the budget, which allocates billions across most sectors of society, manifesting in the form of tax breaks, job training programs, and boosting of critical services. It also precedes the next federal election, which is due between August and May next year.

“This has been the most significant economic shock since the Great Depression,” Frydenberg told the ABC, saying the impact of COVID-19 “dwarfed” the 2008 Global Financial Crisis.

Daniel Wild, director of research at the free-market think tank, the Institute of Public Affairs, said, “It will not just be our children paying back this debt, but our grandchildren and future generations.”

“The Coalition appears to have given up making the argument for economic reform and smaller government,” he said in a statement to The Epoch Times.

The treasurer stated in his pre-budget speech in April that the government’s fiscal spending program would not focus on austerity but would aim to drive unemployment below the 5 percent mark.

In Tuesday’s budget, low and middle-income earners will receive an extra year of tax breaks worth $1,080 per individual and $2,160 for dual-income couples.

Infrastructure will receive $15.6 billion, while $2 billion will be poured into the education sector over the next four years. The childcare sector will receive $1.7 billion and a boost to subsidies for the second or subsequent child of a family.

Aged care was a major winner receiving a record $17.7 billion to fund reforms in the industry, as well as an extra 80,000 home care packages.

The National Disability Insurance Scheme will receive $13.2 billion over four years, while $2.3 billion will be pumped into mental health care and suicide prevention.

The government is also allocating $1.1 billion to support victims of domestic violence, including financial and legal help and emergency accommodation.

Federal Shadow Treasurer Jim Chalmers called the budget a “political fix” designed to get the Coalition government through the next election before the government began “reverting to type.”

“We’ve still got a higher priority on cleaner and cheaper energy, social housing, proper investment in good and secure well paid jobs,” he told the ABC.

Jennifer Westacott, CEO of the Business Council of Australia, said the budget would propel Australia out of the pandemic and lay the foundations for a jobs-led recovery.

“The budget builds on the significant gains we’ve made to create jobs, get people and businesses back to work, rebuild confidence, and fire up economic growth,” she said in a statement.

Michele O’Neil, president of the Australian Council of Trade Unions, welcomed the government’s rejection of austerity measures but said it failed to tackle the issue of low wages and job security.

“The billions provided to business in this budget are given without strings attached and risk again ending up in the pockets of shareholders and CEOs,” she said in a statement. “Any Government financial support to private businesses should be conditional on reliable, well-paid jobs.”

Economist Gigi Foster of the University of New South Wales, said the budget was clearly intended to “win favour” among certain groups.

“The interests of those groups are not perfectly aligned with the interests of Australia as a whole, and the gap between those two sets of interests is a big part of what makes me give the budget a C-grade,” she told The Epoch Times.

Foster however, commended the government’s investment in employment services and traineeships, as well as the tax cuts.

“The former group of programs is useful in helping employees and employers connect with one another in mutually beneficial ways, after many links in the labour market were severed over the past year (whether before or after the conclusion of JobKeeper),” she said.

“I also liked the targeted support for industries hard hit by the events of the past year, although that funding (as with JobKeeper) only seems intended to keep things afloat until a return to comparative normalcy, rather than investing into Australia’s future,” she added.

Wild warned that the increased spending could see interest rates rise, which could incur “significant economic pain” on Australians with mortgages or property investments.