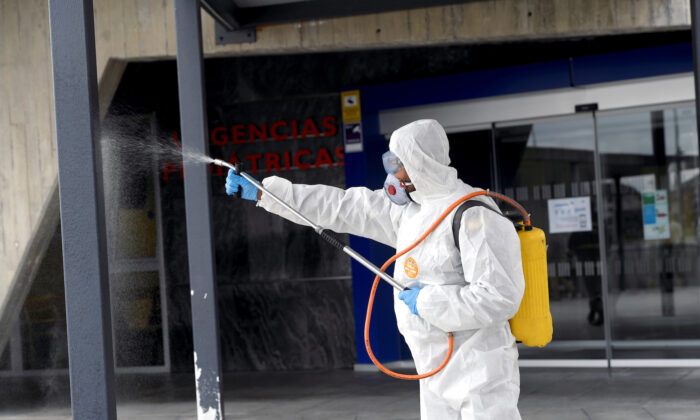 A member of the Military Emergency Unit disinfects a hospital amid the COVID-19 outbreak in Oviedo, Spain, on March 17, 2020. (Reuters/Eloy Alonso)
Europe

The COVID-19 pandemic is surging in Spain, where the worst single-day death toll yet brought the country’s total fatalities above 1,000.

Spain’s health emergencies chief Fernando Simon said the country recorded another 235 deaths, bringing the tally to 20,410 confirmed cases and 1,043 deaths associated with the respiratory disease, caused by the CCP virus.

Spain has now lost 1,043 people to the CCP virus, according to a Johns Hopkins tracker, with the number of confirmed cases now exceeding Iran’s latest figures, making Spain the third-biggest COVID-19 hotspot, behind Italy and China.

“The most difficult days are coming now,” Simon told a news conference on March 20, urging the population to observe a partial lockdown imposed last Saturday as part of a nation-wide state of emergency.

“Keep up the effort, we have to manage (to defeat the virus) as soon as possible. The impact it is having on society cannot be sustained for long,” he said.

Spanish authorities said Friday they would turn a Madrid conference center into a giant makeshift military hospital for thousands of COVID-19 patients.

Cleaning services across the country carried out disinfection efforts at metro stations and nursing homes.

The Spanish government ordered the closure of all the country’s hotels on March 19.

There are still 80,000 tourists on Spain’s Canary Islands, with authorities saying Friday that they expect 30,000 tourists to leave that day.

The rush to leave has led to large crowds at airports on the islands as authorities order people to maintain their distance and stay at home to stop the spread of the virus.

Authorities also vowed to implement special measures in nursing homes, which house people most at risk from the virus.

According to the president of the Community of Madrid, Isabel Díaz Ayuso, 80 percent of people in the Spanish capital will become infected with COVID-19.

“They will have mild symptoms,” she said in an interview on Spanish radio, as cited by CNN, adding that “it will be a problem” for the vulnerable population, which is around 15 percent of people.

“This virus has been in Spain for a longer time and is going to spread to practically everyone, and in most, it will not leave lasting marks. But the problem is the vulnerable population,” she said.

Spanish authorities declared a state of emergency on March 13, with a nationwide lockdown initially expected to last two weeks.

But Spanish minister for transport, José Luis Ábalos, was cited by EU Observer as saying that the lockdown would “last more than 15 days” as this period would likely not be enough for the country to “win the battle” against the virus.

Similar to measures taken in Italy, where the number of cases has reached 47,021 and the number of deaths 4,032, Spain’s state of emergency places tight restrictions on movement with exceptions for essential needs or professional requirements.

“We will eventually return to the routine of our jobs and again visit our friends and loved ones,” prime minister Pedro Sanchez said in a nationally televised statement, the EU Observer reported.

“Until that time comes, let’s not waste energies that are essential now. Let’s not lose our way,” he added, urging people not to leave their homes.

People who “resist or seriously disobey the authorities or officers when they are carrying out their functions” would face fines, the prime minister said.

Airlines in the United States and the United Kingdom have halted all flights to Spain and some other countries in the area.

President Donald Trump banned travelers from the Schengen Area of Europe from traveling to America, citing the explosion of coronavirus cases in the area and a lack of decisive restrictions cutting off travelers from China earlier in the pandemic.

The virus started in Wuhan last year and has surged to become a pandemic that has disrupted lives across the globe.