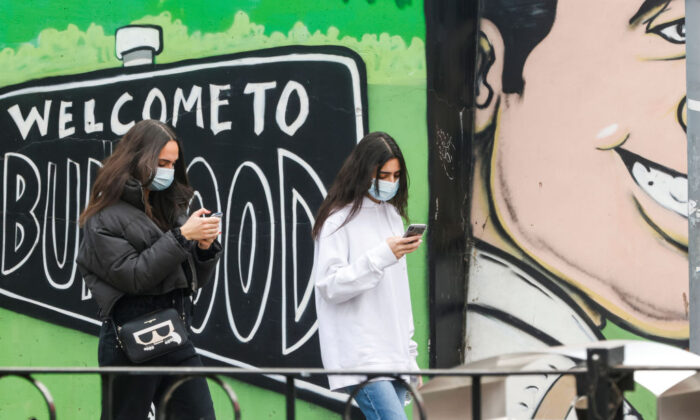 Two girls in masks walk past a "welcome to Burwood" mural in Sydney, Australia, on July 24, 2021. (Jenny Evans/Getty Images)
Australia

A new study has shown that sixty-five percent of young Australians already own a business or intend to start one after the COVID-19 pandemic disrupted their career plans.

The web-hosting company GoDaddy surveyed 1,002 Australians aged 18 to 24 and found that 57 percent of them had changed their work priorities due to the travel restrictions and lockdowns implemented during the past two years.

Additionally, nearly half of the respondents (49 percent) had to change their career or education plans during the pandemic.

At the same time, one in eight young people was operating their own businesses, and another one-fifth expected to kick off their ventures within 12 months.

While a third of those surveyed planned to wait for more than a year to establish their businesses, a similar proportion of young people look elsewhere for employment opportunities.

The most common type of business started by young people was online retail, but professional services such as marketing, design or photography were also popular options.

Notably, a quarter of young people had no desire to work for someone else but themselves, while 34 percent ranked passion as the top reason for choosing a career, followed by work-life balance and monetary reward.

Furthermore, over 75 percent said they could take a pay cut if necessary to follow their passion, with 43 percent willing to scarify 10 to 30 percent of their income.

Nevertheless, the most significant hurdles for aspiring young entrepreneurs were lack of funds (55 percent) and not having the necessary skills (39 percent). Fear of failure and lack of confidence were other common barriers for young people.

Meanwhile, the growth of payroll jobs so far in 2022 has been weaker than a year earlier.

According to the Australian Bureau of Statistics, the number of payroll jobs recorded dropped 0.3 percent in the fortnight to April 16 and fell 0.8 percent over the month. However, it was still two percent higher compared to last year’s figure.

New South Wales, Victoria, Queensland, Tasmania and the Australian Capital Territory witnessed a decrease of 0.4 percent in payroll jobs, followed by South Australia and the Northern Territory with a 0.3 percent dip.

“Payroll jobs fell leading into the Easter holidays. This is something that we usually see around public and school holidays,” ABS head of labour statistics Bjorn Jarvis said.

“While payroll jobs growth has continued to be slower in 2022 than 2021, the difference has also reduced over time given the greater labour market impacts related to the Omicron variant and floods earlier in the year.”