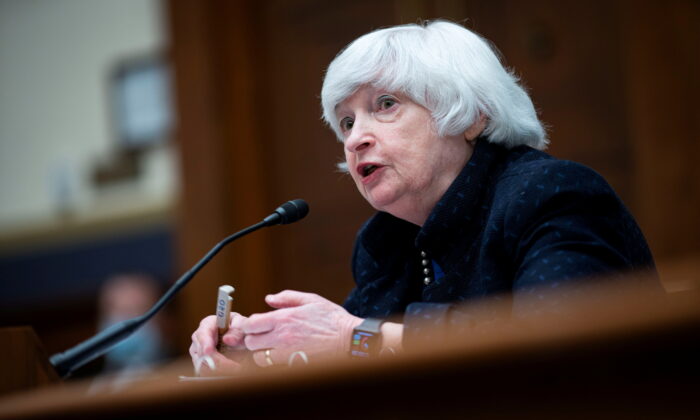 COVID-19 Pandemic Key to Rising Inflation and Must Be Controlled to Bring Levels Down: Yellen

Treasury Secretary Janet Yellen said Sunday that the COVID-19 pandemic is a key factor in rising inflation and that controlling the virus is paramount to getting inflation levels down.

Asked whether she believes prices for the average American will be down by next November, Yellen told CBS’s “Face the Nation” that it “really depends on the pandemic.”

“The pandemic has been calling the shots for the economy and for inflation. And if we want to get inflation down, I think continuing to make progress against the pandemic is the most important thing we can do. I think it’s important to realize that the cause of this inflation is the pandemic,” Yellen said.

“It all but shut down our economy. It boosted unemployment to almost 15 percent and we’ve been opening up in fits and starts. And the pandemic is really responsible in its impact for the inflation that we’re seeing,” the treasury secretary added.

Yellen said she expects inflation levels to lower after the economy has recovered from the pandemic, and when demand patterns return to normal, people start eating out again, and travelling more while spending more money on services.

She also reiterated that she expects inflation to decline and prices to “go back to normal” by the second half of 2022 when labor supply normalizes.

“When labor supply normalizes and the pattern of demand normalizes, I would expect that, if we’re successful with the pandemic, to be sometime in the second half of next year, I would expect prices to go back to normal,” Yellen said.

Yellen’s comments come after U.S. Bureau of Labor Statistics data released on Wednesday show that the U.S. dollar is now losing close to 1 percent of its value every 30 days.

Meanwhile, overall, prices rose 6.2 percent from one year ago, representing the largest year-on-year increase in more than 30 years as inflation persists across sectors, according to the Bureau.

Those figures come shortly before the peak holiday season, adding extra pressures to both consumers and retailers. However, federal officials are urging calm, and the Federal Reserve has long maintained that inflation is merely “transitory.”

The White house has attempted to alleviate rising inflation through easing supply-chain bottlenecks and shortages, and in October said it had received confirmation from UPS, FedEx, Walmart, and other companies, as well as the Port of Los Angeles, to increase the number of shifts to deal with a backlog of container ships, labor shortages, and warehousing issues.

Several top administration officials have also touted the White House-backed social spending package as a solution to soaring inflation in the United States, though some Democrats disagree.

“Inflation is high right now, and it is affecting consumers in their pocketbook and also in their outlook for the economy. But those concerns underscore why it’s so important that we move forward on the Build Back Better legislation,” White House National Economic Council Director Brian Deese told CNN in an interview. “This, more than anything, will go at the cost that Americans face.”

Deese claims the bill would drive down drug prices, lower the costs of child care, and also reduce costs associated with home ownership. Yellen told CBS on Sunday that she believes the social spending bill would aid recovery.

“There’s quite a lot in the package that will be supportive of labor force participation. There’s money in this package also to improve home health care for elderly citizens who have health issues. And for those who are disabled. And again, that’s a support that will make it easier for people to work and care for family members at the same time,” Yellen said.

However, contrary to the Biden administration officials’ comments about a reduction in inflation, Moody’s Analytics said that the $1 trillion infrastructure bill, combined with the approximately $1.75 trillion social and climate spending package, would add 0.3 percentage points to inflation, on average, between 2022 and 2024.