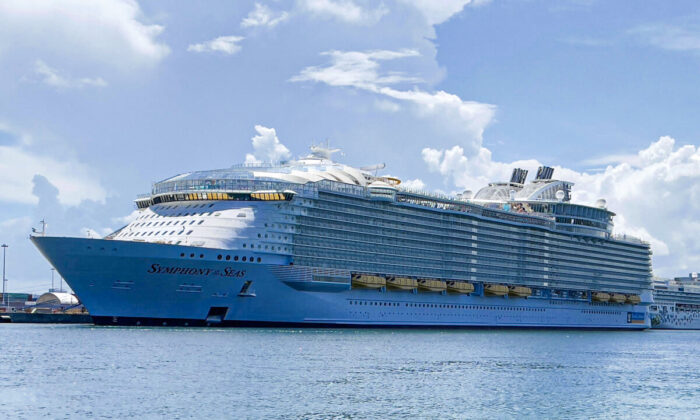 The Royal Caribbean cruise ship, Symphony of the Seas, is seen moored in the Port of Miami on Aug. 1, 2021. (Daniel Slim/AFP via Getty Images)
By Jack Phillips

Forty-eight people who were onboard the Royal Caribbean Symphony of the Seas cruise ship tested positive for COVID-19, the illnesses caused by the CCP (Chinese Communist Party) virus, although Royal Caribbean requires everyone aged 12 and older to show proof of vaccination in order to board their ships.

The cruise operator said Sunday that each person who tested positive for the virus immediately went into quarantine. Another six people who had tested positive disembarked the ship when it docked in Florida and were taken home, the company said.

“We were notified by the (Centers for Disease Control and Prevention) that a guest on board our (December) 4th cruise tested positive and it was identified as Omicron,” Sierra-Caro added in a statement to outlets. “They (the CDC) asked us to notify guests on the sailing, the one that ended today, and the current one.”

It’s not clear if there were any children under the age of 12 onboard the ship. The Epoch Times has contacted Royal Caribbean for comment.

According to a statement published on Royal Caribbean’s website, guests who are aged 12 and older have to show proof they’ve been vaccinated for COVID-19 in order to embark on the cruise.

It added: “Each guest’s regimen must include at least two doses of vaccine unless the guest received the single dose Johnson & Johnson vaccine. This guidance is per the U.S. CDC, and no exceptions will be made, even if the guest’s resident country has authorized a single-shot regimen for a two dose vaccine.”

In a statement, the CDC confirmed it is aware of the Royal Caribbean (RCI) outbreak and is “working with RCI to gather more information about the cases and possible exposures, and RCI will be collecting specimens from the current voyage for genetic sequencing.”

Sierra-Caro said that future cruise trips have not been impacted by the outbreak.

Earlier in December, COVID-19 cases were reported on a Norwegian Cruise Lines ship, according to the Lousiana Department of Health. The Norwegian Breakaway cruise ship had left New Orleans on Nov. 28, making stops in Mexico, Honduras, and Belize.

Norwegian Cruise Lines said at the time that it requires everyone on board to be fully vaccinated.