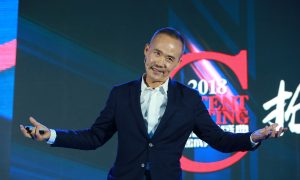 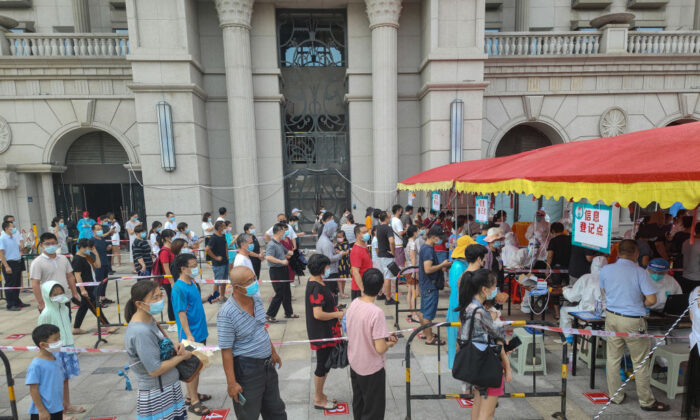 Residents queue to undergo nucleic acid tests for the COVID-19 coronavirus in Xiamen, in China's eastern Fujian Province on Sept. 14, 2021. (STR/AFP via Getty Images)
INSIDE CHINA

The COVID-19 epidemic in China’s southeast province Fujian has quickly spread to many other places, including the major port city Xiamen where the famous tourist island Gulangyu is located. The island and many indoor venues have been shut down. Local authorities reported 32 new infections in one day on Sept. 14.

Since Sept. 10, local clusters of epidemics have occurred successively in Putian, Quanzhou, and Xiamen of Fujian Province. As of Sept. 13, a total of 123 cases of infection had been reported, with 33 people in Xiamen’s handicraft factory infected. At present, the Chinese communist regime has announced two high-risk areas in mainland China, including Fengting town in Putian city and Xinmin town in Xiamen, both of which are located in Fujian Province.

The Xiamen local authorities issued several public notices on the evening of Sept. 13, forbidding people from leaving Xiamen starting from midnight. According to the notices, if people really needed to leave the city, they would need to have a green health code plus a 48-hour nucleic acid test certificate. In addition, all indoor businesses have been suspended, including chess and card rooms, theaters, internet cafes, karaoke halls, bars, billiards halls, museums, libraries, fitness clubs, training institutions, and other indoor venues.

The outbreak has affected tourist attractions in Xiamen, especially Gulangyu, which is only 1.24 miles away from the First Medical College of Xiamen University—where there are confirmed cases.

On Sept. 14, a staff member of a travel company in Gulangyu told the Chinese language Epoch Times that due to this round of COVID-19 outbreak, joint tickets are suspended and Gulangyu’s indoor exhibition halls are closing down. She also said that people are trying not to come to Xiamen at this time. “The epidemic situation is still escalating. Today there are 32 new cases. If you come here, your health code will turn into a red code, and you can’t leave,” she warned.

Meanwhile, an employee of the Gulangyu Sea Recreation Project said that they might not need to go to work tomorrow due to closure. “If you haven’t arrived at Xiamen yet, don’t come. If you do, you won’t be allowed to leave. The tourist spots are shutting down,” he emphasized.

According to mainland Chinese media, the owners of Gulangyu’s homestays complained that 90 percent of reservations have been canceled in the past few days. The Epoch Times obtained video footage of residents in Xiamen lined up to take the COVID-19 nucleic acid test on Sept. 14, as required by the authorities.

A Xiamen resident surnamed Chen told The Epoch Times, “Recently, the outbreak in Xiamen has been severe. Now all schools are closed, and students are undergoing nucleic acid tests.”

Another local resident surnamed Shen said, “The local COVID-19 epidemic is very serious again, and many communities are being locked down. I am very worried about it, and I have just gone into the mountains—living in the countryside.”

Meanwhile, hospitals have been shut down in Xiamen. Local residents suspect there are unreported cases spreading in hospitals that are concealed by the regime.

On Sept. 13, Xiamen officially announced that a 48-year-old man, who is on the service staff at the First Affiliated Hospital of Xiamen University, was infected with COVID-19. The Epoch Times contacted the hospital and was told that the hospital had stopped all medical consultations since Sept. 13. However, after nucleic acid testing was conducted in the hospital, no new cases have been announced. According to local media, Xiamen Jimei Street Community Health Service Center also announced closing all departments from Sept. 14, citing epidemic prevention and control.

Some netizens suspect a cover-up by authorities saying, “Why is it only spreading in factories but not in hospitals?”