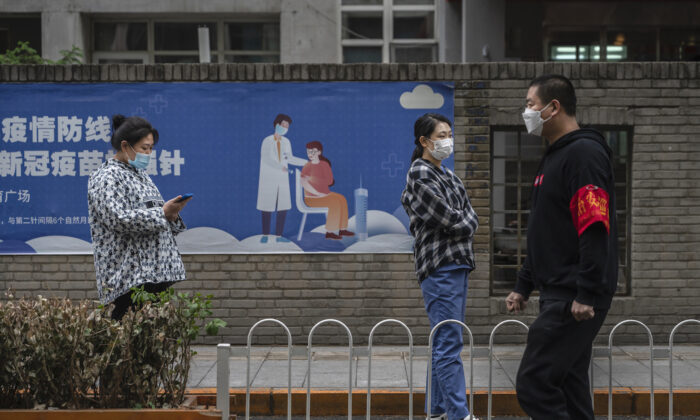 People wait in line for nucleic acid tests to detect COVID-19 next to a poster for vaccinations at a makeshift testing site in the Central Business District in Chaoyang in Beijing, China on April 27, 2022. (Kevin Frayer/Getty Images)
INSIDE CHINA

A COVID-19 outbreak is rapidly spreading in Beijing, causing schools to be shut down in an entire district. Amongst the fear of a city-wide lockdown, residents rush to stock up on food and supplies, and freezers are sold out.

On April 28, Pang Xinghuo, deputy director of the Beijing Center for Disease Control and Prevention, said that from April 27–28, 56 new local cases were reported in Beijing, many of them are students and wedding guests.

Since April 22, a total of 194 COVID-19 cases have been reported in Beijing, involving 12 districts out of a total of 16. Authorities are mass testing all residents in the districts, triggering fear of a city-wide lockdown, as many see mass testing as the prelude to it.

Beijing residents are stocking up on food and supplies, having watched residents of Shanghai struggle for food and medicine under the lockdown. Household freezers are out of stock.

Some areas in the city have already been locked down for some time.

Shi Lei (pseudonym), a villager in Yuzhuang, Doudian Town in Fangshan District of Beijing, told The Epoch Times on April 27, “The whole village is closed, and the villagers are quarantined in their homes in the village. It has been 21 days. More than a dozen people have been infected. We are not allowed to enter or leave the village. Delivery of food and supplies has become a problem.”

The wave of the COVID-19 outbreak in Beijing has affected schools, and the number of infected students has continued to rise.

As the “May Day” holiday is approaching, Beijing officials issued a notice to order all the city’s elementary and middle schools and kindergartens to be closed for one day in advance of the holiday, and the time when school will resume has not yet been determined.

All the schools in the Tongzhou district in the southeast of the city have already been shut down since April 27.

Parents received an urgent notice that stated from April 27 classes in elementary and middle schools, kindergartens, and secondary vocational schools in the district would be suspended. Teachers and students should stay at home and take nucleic acid testing in their communities.

The Epoch Times called Beijing Huiwen Middle School Chaoyang Chuiyangliu Branch to inquire about the infection status of the students of the school. The first cases of student infections of this current wave were reported in this school.

A school teacher Wei Le’an (pseudonym) said: “Students have all been taken away for centralized isolation. No one has notified us of the specific numbers [of infection], and we don’t know how many there are.

The spread of COVID-19 in Beijing and the shutdown of many communities have caused some Beijing residents to stock up on food supplies.

According to a report by mainland Chinese Zhongxin Jingwei, on April 24 alone, the major appliances retailer Beijing Suning Commerce Group sold more than 300 freezers, roughly equivalent to a month’s worth of sales.

A resident surnamed Li from Daxing District, Beijing, bought a vertical freezer: “There was just one left in the mall, and I grabbed it. After buying it, I feel much more at ease, and there is no pressure to stock up on food.”

Gu Qing’er and Hong Ning contributed to the report.