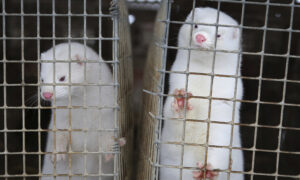 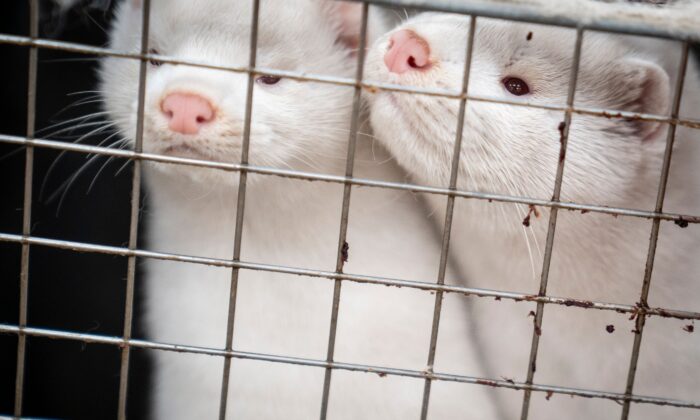 Mink look out from their cage at a farm near Naestved, Denmark, on Nov. 6, 2020, where many of the animals had to be killed due to an outbreak of COVID-19. (Mads Claus Rasmussen/Ritzau Scanpix/AFP via Getty Images)
Canada

A COVID-19 outbreak has been declared at a mink farm in B.C.’s Fraser Valley, with eight people testing positive for the virus.

Fraser Health Authority said in a statement on Dec. 6 that individuals who tested positive as well as their close contacts are self-isolating, while other employees are being screened.

The statement did not say how the virus was transmitted, but authorities are monitoring the situation closely as minks are thought to be susceptible to SARS-CoV-2, the virus that causes COVID-19. Testing of the animals is currently underway.

“The mink farm has been ordered to restrict the transport of animals, products and goods from the farm,” Fraser Health said in a news release. “Animal welfare is being supported by the Ministry of Agriculture and testing of animals is underway. Enhanced measures are in place to ensure safety of animals and farm owners.”

Fraser Health did not identify which community or farm the outbreak occurred at; there are 14 mink farms in the Fraser Valley. So far, the outbreak is limited to one farm, B.C.’s agriculture ministry said.

“Fraser Health is working in partnership with the BC Ministry of Agriculture, BC Ministry of Health, WorkSafeBC and BC Centre for Disease Control to support the health of the farm operators and staff and address this outbreak,” said the statement from Fraser Health.

Last month, government officials in Denmark ordered the culling of 17 million mink after 11 people were sickened by a mutated version of the virus that had been observed among the animals.

Since June, 214 human cases of COVID-19 have been identified in Denmark with SARS-CoV-2 variants associated with farmed minks, including 12 cases with a unique variant, according to the World Health Organization.

“Minks were infected following exposure from infected humans. Minks can act as a reservoir of SARS-CoV-2, passing the virus between them, and pose a risk for virus spill-over from mink to humans,” said a Nov. 6 statement from the WHO.

In addition to Denmark, the Netherlands, Spain, Sweden, Italy, and the United States have reported cases of SARS-CoV-2 in farmed minks.