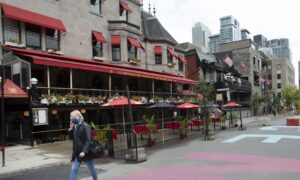 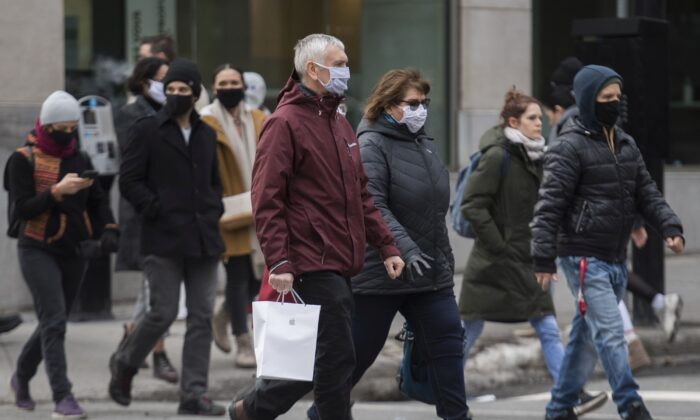 People walk along a street in Montreal on Nov. 29, 2020, as a partial COVID-19 lockdown continues in Quebec. (The Canadian Press/Graham Hughes)
Canada

COVID-19 in Canada: What the Numbers Show

At the tail end of Alberta Premier Jason Kenney’s press conference more than a week ago, where he gave details on heightened COVID-19 restrictions in the province, came a stunning admission—the first of its kind by any Canadian leader since the pandemic began.

“This government made, I think, a grave mistake in the spring when we made a stupidly arbitrary distinction between essential and not essential retail businesses,” Kenney said on Nov. 24 of his government’s decision to shutter the province for 10 weeks at the start of the pandemic.

“That had the unintended consequence of allowing Walmarts and Costcos to sell darn near everything because they have a grocery section or they sell pharmaceuticals, while shutting down thousands and thousands of small and medium-sized retail businesses.”

Kenney has said his province is focusing on targeted measures rather than a blanket lockdown. While data available to the public in different provinces is scarce, from what has been released so far insights can be gained as to where targeted measures can be most effective.

In the city’s industrial Leaside neighbourhood, small business owner Adam Skelly was arrested and charged for defying the Reopening Ontario Act by operating his BBQ restaurant in defiance of local lockdown measures.

Meanwhile, just around the corner from Adamson Barbecue, a Costco store continues to conduct indoor business—encompassing a food court and grocery store that sells BBQ chicken—during Toronto’s as well as the Peel and York regions’ “grey zone” restrictions that Skelly protested.

Facing criticism that he flagrantly disregarded rules intended to staunch the spread of the virus, Skelly noted what he believes are the unfairness of the lockdowns and urged other business owners to “fight for freedom.”

“The measures in the [Reopening Ontario] act have to be proportionate and they’re not. They’re disproportionately affecting small businesses,” he said in an interview posted by journalist Leigh Stewy on Twitter.

In Kenney’s case, he was criticized for not enacting a full-scale lockdown and he too pointed to the importance of safeguarding fundamental rights.

“Since when should governments start with an impairment of fundamental Charter-protected rights and freedoms rather than engage in such an impairment as a last and final resort?” he said on Nov. 24.

The debate continues. On one side is the obligation to protect public safety; on the other side is the imperative to respect individual rights and prevent unintended economic and social consequences of lockdowns.

Meanwhile, publicly available COVID-19 data from provincial and federal sources tell a pandemic story of ravaged elderly populations, most stranded in long-term care facilities, with some of the hardest hit being in Ontario and Quebec.

Death tolls in long-term care facilities across the country have led to lawsuits, including class-action suits alleging negligence in a number of provinces. Meanwhile, these facilities continue to be primary outbreak hubs, accounting for 18 percent of virus transmissions in Toronto and 33 percent in Ottawa between Aug. 1 and Oct. 24.

Health-care settings, schools, and daycares were also among the top transmission vectors during that same period, according to available Ontario data that also indicates double-digit percentages at “grocery, retail and services” for Peel and York regions. In Toronto, 14 percent of outbreaks are attributed to 27 “restaurants, bars, and nightclubs.”

Meanwhile, evidence shows that people with pre-existing chronic conditions or compromised immune systems are at higher risk of dying due to COVID-19, especially among those over the age of 80, according to Statistics Canada. Based on data on the over 9,500 COVID-involved deaths in Canada between March 1 and July 31, 2020, 90 percent had at least one other cause, condition, or complication reported on the certificate.

Among those deaths, common comorbidities included pneumonia, hypertensive diseases, ischemic heart disease, and respiratory failure. For those aged 65 or older, especially those aged 85 or older, dementia or Alzhemier’s were most often listed as comorbidities.

In Alberta, 77.1 percent of those who succumbed to COVID-19 as of Nov. 29 suffered three or more conditions, based on statistics released by that province, while just 2 percent, or 11 people, died of complications related solely to their COVID-19 infection.

These Alberta statistics came in for criticism from Health Minister Patty Hajdu after Toronto Sun columnist Anthony Furey drew attention to them in an article on Nov. 17. During debate in the House of Commons on Nov. 26 on the government’s response to the pandemic, Hajdu described the reporting of the statistics as “fake and dangerous news.”

According to the report, for the period from Jan. 15 to Nov. 21, the median age for hospitalization for COVID-19 was 66, while the median age of death was 85.

East of Quebec and inside the “Atlantic Bubble,” where interprovincial travel is restricted to Newfoundland and Labrador and the Maritime provinces of Prince Edward Island, New Brunswick, and Nova Scotia, publicly available data is more vague, albeit the toll of the virus is less pronounced.