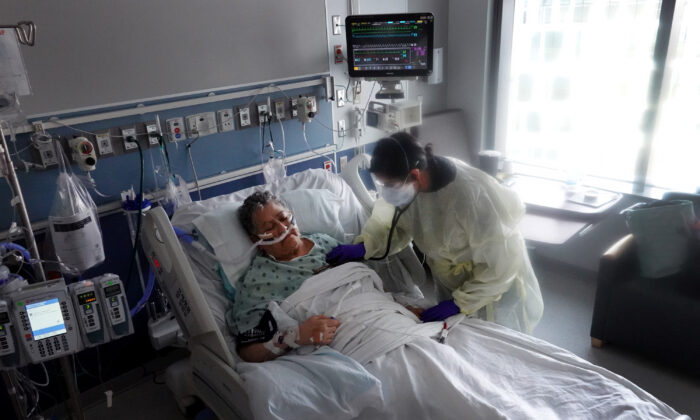 Hospital admissions for COVID-19 have dropped in many states across America in recent weeks, easing staffing issues for some hospitals.

All but five states have recorded fewer admissions in recent weeks, with some seeing sharp drops, according to data reported to the U.S. Department Health and Human Services.

Only Maine, Montana, Nebraska, North Dakota, and Washington state have seen COVID-19 hospitalizations stay flat or rise, according to the data.

Across the northeast, many states have recorded steep reductions in the number of people seeking hospital care for COVID-19, the disease caused by the CCP (Chinese Communist Party) virus.

Maryland, for instance, logged just 145 admissions on Feb. 1—down 72 percent from the peak on Jan. 7.

The number of facilities reporting critical staffing shortages, meanwhile, hit a high of 1,182 on Jan. 7. As of Feb. 1, that number had gone down by 54 percent, according to the data.

An unprecedented number of COVID-19 cases have been logged in the United States since December 2021, in a wave driven by the Omicron virus variant.

The strain is better at evading protection from vaccines and natural infection, and the sheer number of people contracting the virus had led to more hospital admissions, leaving some hospitals overburdened.

Staffing was already an issue due to workers needing to isolate after testing positive for or being exposed to COVID-19; widespread COVID-19 vaccine mandates; and burnout after nearly two years of toil during the pandemic. Some worry the issues could be compounded by the Biden administration’s health care vaccine mandate, which took effect late January and forces institutions that receive Medicare or Medicaid funding to verify their workers have received a jab.

With the falling numbers, officials are expressing optimism.

Read More
EXCLUSIVE: Donald Trump: ‘We Have to End the Mandates’

Officials at the University of Pittsburgh Medical Center in Pennsylvania reported a rapid reduction in COVID-19 hospitalizations, pointing to a similar trendline weeks ago in South Africa where Omicron was first identified.

“We’re experiencing that here right now. We’re not completely done with it yet. I can’t predict what will happen in the future.” Dr. Donald Yealy, the medical center’s chief medical officer, told reporters in a recent briefing.

Nationwide, hospital admissions for COVID-19 dropped to an average of 17,100 per day over the last seven days, down 14 percent from the previous week. The daily average of cases plunged 36 percent over the same time, according to data reported to the Centers for Disease Control and Prevention (CDC).

Deaths attributed to COVID-19, a lagging indicator, were up about 4 percent over the prior week, or at about 2,300 per day.

“Vaccination and booster doses substantially decrease the risk of death from COVID-19,” she said.

She spoke after a CDC-backed study published on Monday found vaccinations provided little protection against infection but held up relatively well against hospitalization and death.