COVID-19 Hospital Admissions Fall for 1st Time in Weeks Across US: HHS 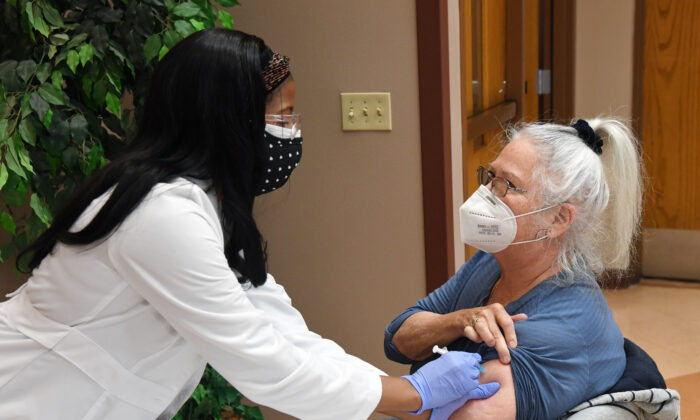 A Moderna COVID-19 vaccination is administered to a woman at the Doolittle Senior Center in Las Vegas, Nevada on Feb. 3, 2021. (Ethan Miller/Getty Images)
By Jack Phillips

Hospital admissions for COVID-19 patients in the United States are declining for the first time since late June, suggesting the latest surge has peaked.

The seven-day average of new daily hospitalizations with confirmed COVID-19 dropped by 2.4 percent from a week earlier to about 12,280—the first such drop since around June 27, according to the U.S. Department of Health and Human Services. It comes as fewer hospitalizations are being reported in Florida, Texas, and other Southern states, the agency said.

The U.S. Centers for Disease Control and Prevention (CDC) COVID-19 tracker shows that the seven-day average for both deaths and cases appears to be leveling out. Previous surges of cases—including in the spring of 2020, in late July to early August 2020, and January 2021—always leveled out and then dropped.

During prior surges, the COVID-19 death rate appeared to be higher, according to the CDC’s data. For example, on Jan. 13 of this year—which saw the most COVID-19 deaths per day—the number of daily deaths was about 4,169, with about 240,000 daily cases. Amid the current surge, on Aug. 31 the CDC reported the number of daily deaths (seven-day average) to be about 985, with about 150,000 daily cases.

According to the CDC’s latest data, about 74.4 percent of all U.S. adults have received at least one dose of a COVID-19 vaccine.

A new study published in Nature last week revealed that about one-third of all Americans, or more than 100 million people, had likely been infected with COVID-19 by the end of 2020. Officially, about 19.6 million cases of the virus were confirmed across the country.

Dr. Jeffrey Shaman, director of the Climate and Health Program at Columbia University, told WebMD that the death rate from COVID-19 fell from 0.77 percent in April 2020 to 0.31 in December 2020, meaning that by the end of last year, the COVID-19 survival rate for all demographics was 99.69 percent. The estimated death rate for influenza is 0.08 percent, the researchers noted.

“There are still more people susceptible than we had believed,” Dr. Jill Foster, a pediatric infectious disease doctor at the University of Minnesota Medical School, said in the report. “If the pattern continues where the Delta variant infects a significant portion of those vaccinated, the number of people susceptible rises even higher than was predicted.”

Last week, researchers in Israel found that individuals who had previously been infected with COVID-19 saw greater protection against the Delta variant than those who received both Pfizer vaccine shots.

“This study demonstrated that natural immunity confers longer-lasting and stronger protection against infection, symptomatic disease and hospitalization caused by the Delta variant of SARS-CoV-2, compared to the BNT162b2 two-dose vaccine-induced immunity,” the researchers wrote, noting that their study has yet to be peer-reviewed.

COVID-19 is the illness caused by the CCP (Chinese Communist Party) virus, also known as SARS-CoV-2.