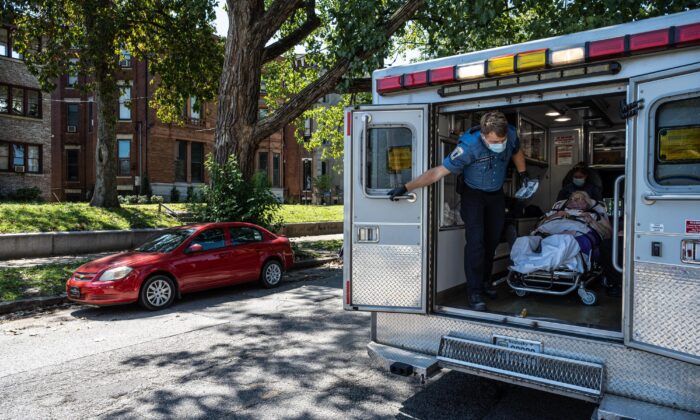 The fewest Americans admitted to the hospital are testing positive for COVID-19 since August 2020, according to data the Centers for Disease Control and Prevention (CDC). The 7-day average of daily new admissions sunk to 1,494 on March 31, down from over 21,000 a day in mid-January, the data shows. The previous low was on June 23, 2021, when the figure stood at 1,829.

Hospitalizations have been a key benchmark in measuring the severity of the pandemic. A number of federal, state, and local measures to mitigate the spread have been dropped in recent weeks. Some experts have argued the measures, such as mask wearing in public and lockdowns of schools and businesses, were ineffective to begin with.

The low numbers come in the wake of the Omicron variant of the CCP (Chinese Communist Party) virus, which causes COVID-19. The variant has proven to be highly infectious and able to overcome immune responses induced by vaccination. During the peak days in January, some 700,000–800,000 people a day were testing positive—several times more than during previous waves of infections. The variant also appears to be less lethal. Last winter, over 240,000 deaths were attributed to COVID-19 from December 2020 to February 2021. This winter, there were about 160,000 deaths in the same period. Last winter, however, only a few percent of the population were vaccinated. This winter, it was about 65 percent.

The number of people getting the first dose of the vaccine has dropped below 50,000 a day in recent weeks, the lowest since December 2020, when the shots just became available, CDC data shows.

It’s not clear how the virus will behave from this point on. Some experts predict it will become “endemic,” coming in seasonal waves every year and possibly becoming less virulent over time. So far, there doesn’t appear to be another variant lined up to replace Omicron.

More than a million deaths and nearly 80 million infections have been linked with COVID-19 in the United States.

The CDC data has its limitations. Recently the agency removed over 72,000 deaths from its tally, saying they were erroneously counted as COVID-related. Florida, however, argued that its share of that number, about 20,000, were in fact COVID-related and should be added back.

Since the onset of the pandemic, data consistency has been an issue. The CDC repeatedly changed its guidance on how cases and deaths should be reported and classifications have also differed state-to-state and even locality-to-locality.

Last year, Santa Clara County in California cut its COVID death count by 22 percent, citing a change in criteria. Before that, its tally included people who died while infected with the virus, even if it didn’t contribute to their cause of death.

The nearby Alameda County similarly revised down its death total by around 25 percent.

Update: The article was updated with more recent data.

Correction: A previous version of this article incorrectly characterized the hospital admission data. The figures refers to a 7-day average of daily admissions. The Epoch Times regrets the error.