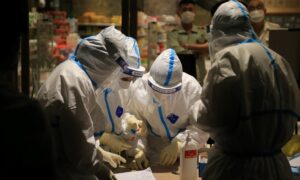 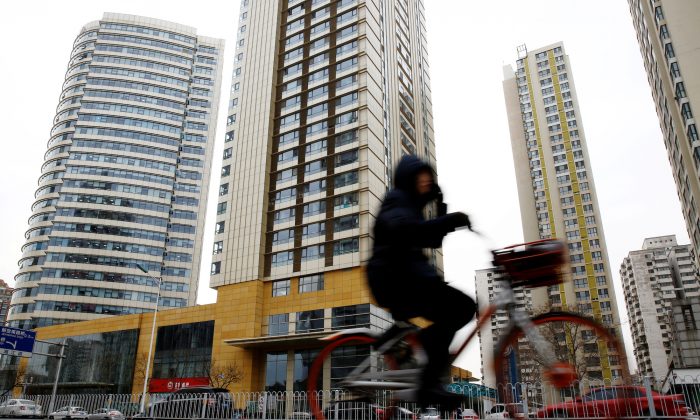 A woman cycles past a building in Tianjin, China, on Dec. 21, 2018. (Thomas Peter/Reuters)
China Society

Locally transmitted cases of COVID-19 have occurred one after another in Tianjin this month. An infectious disease expert told The Epoch Times the situation is indicative of a community spread in the city. On Nov. 19, a local hospital was locked down after a patient tested positive for the CCP (Chinese Communist Party) virus (novel coronavirus), which causes COVID-19.

On the evening of Nov. 19, netizens posted a video on Chinese social media Weibo, stating that a patient at TEDA Hospital in Binhai New Area in Tianjin had tested positive. They said the hospital had been locked down and the street was blocked by police.

On the same day, the Lanyuan Eco-city community office of Tianjin posted an emergency notice on another popular Chinese social media app WeChat, asking residents who have been to TEDA Hospital after Nov. 12 to report to local authorities as soon as possible.

According to mainland Chinese media, TEDA Hospital staff confirmed that the hospital had closed all its clinics and no one is allowed to enter or leave the premises, starting at 8 p.m. on Nov. 19.

On Nov. 18, local authorities in Tianjin confirmed an asymptomatic case in Kanhaixuan community, according to an official notice. A 33-year-old woman, surnamed Kang, tested positive for COVID-19 during quarantine. She may have contracted the CCP virus from her neighbor, surnamed Wang, who lived in the same apartment building. Wang was also diagnosed last month as an asymptomatic carrier.

The official notice stated that on the morning of Nov. 9, Wang, Kang and her siblings entered the same elevator. Within a week, Kang’s brother and sister took a nucleic acid test and their results were negative. Both are currently in quarantine.

In the early morning of Nov. 20, Tianjin authorities raised the emergency level to “medium-risk” at Kanhaixuan community. So far, Tianjin’s medium-risk areas have increased to three, where some of the city’s cold storage warehouses are located.

On Nov. 19, The Epoch Times spoke with the owner of a supermarket outside of Kanhaixuan. The shop owner, who wanted to remain anonymous, said the entire community was locked down on Nov. 18 after two cases (referring to Kang and Wang) were found in one residential building. No one is allowed to enter and leave the apartment building and the residents have to be quarantined for 14 days, regardless of their COVID-19 test result. He said that all the locals in that community have all done the nucleic acid tests.

He added that all the shops around Kanhaixuan are closed and his business is also affected by it—customers have stopped coming and he may be ordered by local authorities to close his store.

An owner of a homestay in Kanhaixuan, who declined to give her name, told The Epoch Times on Nov. 18 that those who were in close contact with the confirmed COVID-19 patients were taken away for quarantine. “Now no one can leave or enter this community,” she said.

On Nov. 8, Tianjin authorities declared a state of emergency and announced the city has entered “wartime status” after two COVID-19 cases were confirmed. Chinese media reports claimed that the two patients contracted the disease from a cold storage facility in the city.

Dr. Sean Lin, a former U.S. Army microbiologist and former lab director of the viral disease branch at Walter Reed Army Institute of Research, told The Epoch Times that the virus appears to be spreading in communities and local authorities are concealing the actual number and scope of infections, otherwise they would not have announced “wartime status” for epidemic prevention.

Lin added that if the public does not know the real situation, then it would be more difficult for authorities to carry out containment measures to curb the spread of the virus.

The Epoch Times staff Hong Ning and Li Qiong contributed to the report.