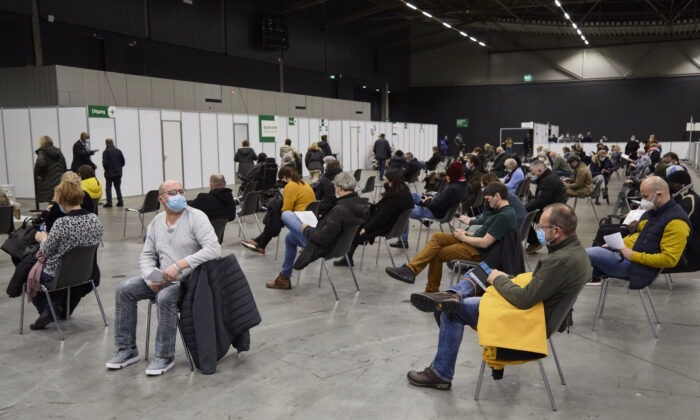 People are waiting 15 minutes in a waiting room after a booster vaccination in a vaccination center located in concert hall Ahoy in Rotterdam, Netherlands, on Dec. 29, 2021. (Pierre Crom/Getty Images)
Europe

Booster shots may be able to cut hospitalization rates in Europe by at least half a million patients, the European Union’s (EU) public health agency said on Thursday.

The European Centre for Disease Prevention and Control (ECDC) announced in a Jan. 27 statement it estimates that “the current uptake of a booster dose achieved by early January may reduce future Omicron hospital admissions by 500,000 [to] 800,000” in the EU/EEA (European Economic Area).

The ECDC figures cover the EU’s 27-nation bloc and the EEA—which consists of Iceland, Liechtenstein, and Norway. The EEA unites the three countries with the 27-nation bloc into a regional trade organization that follows the same rules, enabling merchandise and travelers to move freely about the EEA in an open and competitive environment.

“Extending the booster program to all previously vaccinated individuals could reduce admissions by another 300,000 [to] 500,000,” the ECDC said.

Cases of the relatively mild Omicron variant in Europe are “spreading with unprecedented speed and intensity,” according to the health agency, which noted that the overall reported infection rates are “three times higher” than the highest peak during the CCP (Chinese Communist Party) virus pandemic nearly two years ago.

Stella Kyriakides, EU’s Commissioner for Health and Food Safety, said authorities must remain vigilant in detecting potential future CCP virus variants, adding that although the peak of infections appears to have been reached recently, the pandemic is not over.

Early data on boosters against Omicron indicates much of the lost protection is restored but that the protection against both infection and severe disease drops again within weeks.

Researchers with the U.S. Centers for Disease Control and Prevention (CDC) and other health institutions said in a study that the effectiveness of the two most preferred COVID-19 vaccines, Pfizer and Moderna, dropped dramatically against both Omicron infections and hospitalizations in the United States—with protection dropping to as low as 38 percent among those who got their second dose over six months prior.

Effectiveness against hospitalization also dropped 9 percent among those who finished their primary regimen within six months of being admitted and nearly a quarter—down to 57 percent—among those who had gone over six months since the second dose of the initial regimen.