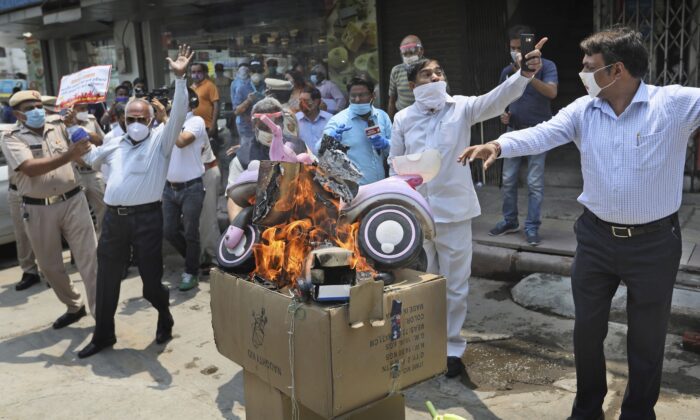 The Chinese communist regime is not to be trusted and is becoming a significant threat to world stability.

Its encroachments over the years into the Indian territory of Ladakh are a case in point. Despite decades of negotiations between the two countries, the border dispute between India and China, which has been going on since 1962, has not been resolved.

The armies of the two countries have come face to face from time to time over the last 45 years, but in the last several weeks, tensions between the Indian and Chinese armies have been simmering in the Galvan Valley in the Indian territory of Ladakh.

On June 9, it was reported that Chinese and Indian forces had begun withdrawing from the Galvan Valley and two other areas in eastern Ladakh, signalling a negotiated solution to the month-long dispute. The Chinese and Indian forces withdrew some of their troops from Galvan, Hot Springs, and Patrol Point PP-15, and also removed temporary structures.

But on June 15, 20 Indian soldiers including a colonel were killed in a fierce clash between the two armies in the Galvan Valley. China has not yet released figures on its death toll. According to reports, the two armies did not use firearms in the clash as India and China agreed many years ago not to take up arms in any dispute. So far, both sides have adhered to it.

Although no firearms were used, the Chinese military used sticks and rods heavily studded with nails, with the pointed ends exposed. One journalist who tweeted a picture of the rods said, “Such barbarism must be condemned. This is thuggery, not soldiering.” The Indian Army has also released pictures of these weapons. Indian External Affairs Minister Subrahmanyam Jaishankar has said that the Chinese side attacked in a well-planned manner, resulting in violence and loss of life. This has been done despite the agreement to maintain the status quo.

According to news reports, Jaishankar said he spoke to his Chinese counterpart Wang Yi on the phone and said the two countries had agreed to reduce “tensions” on the ground “as soon as possible.”

China’s economy is the second-largest in the world after the United States. One of China’s concerns is the growing cooperation between India and the United States. China has been criticized for its lack of transparency around the coronavirus outbreak, and the pandemic has put its trade ties in jeopardy. U.S. President Donald Trump has called for an independent inquiry into the virus’s origins in China. He also announced major cuts in trade between the two countries.

Indian Prime Minister Narendra Modi has also emphasized increasing self-reliance, which will affect imports from China. This seems to be a significant factor for China to assert itself. As far as trade and imports with China are concerned, Beijing is sending a strong signal to India to maintain the status quo, and could use this factor to negotiate in Ladakh.

The Chinese regime is at odds with many of its neighbours and is claiming territories or economic zones. Taiwan is constantly under threat of Chinese domination. Beijing has recently tightened its grip on Hong Kong and effectively ended the “one country, two systems” agreement with Britain with the new security law it’s imposing on the city.

Military bases are being set up in the China Sea with several manmade islands. Many areas of Japan, the Philippines, and Vietnam, especially the maritime economic zones, are being claimed by China in violation of international norms.

Having occupied the Aksai Chin region of India since 1962, China is claiming Sikkim and Arunachal Pradesh, undermining the Border Defence Cooperation Agreement between the two countries.

The world is in jeopardy not only from the COVID-19 virus but also from China’s growing economic and military power. Believing in the Beijing regime is akin to cheating ourselves.