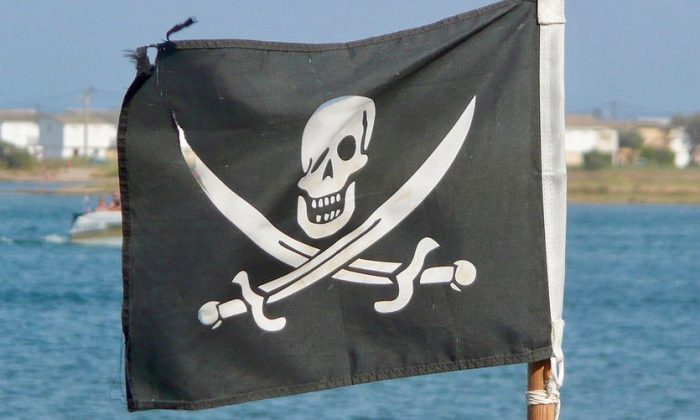 A U.S. nuclear submarine returned to port sporting a Jolly Roger flag as crew peered across the open waters.

The skull and crossbones flag atop the secretive submarine sparked speculation about what the U.S. Navy crew aboard had just returned from doing, Fox News reported. The Jolly Roger is known as a pirate symbol, but variations of the symbol have been used by militaries of different nations.

The photo was posted to Twitter by defense journalist Ian Keddie. Fox News reported that a Pentagon related social media account also posted the photo. Along with a skull and crossbones or swords, there is usually other symbolism to indicate the nature of the military actions that the sub and its crew had engaged in. In this case, the other symbolism isn’t visible, leaving observers to ponder amid the tensions in North Korea.

The USS Jimmy Carter is a nuclear-powered submarine and the last produced of the Seawolf-class vessels. There were only three such vessels produced. This one is 450 feet long and has extremely versatile underwater capabilities. The sub was also filmed flying a Jolly Roger in April.

The Jolly Roger could signify a return from a military action, but the military hasn’t released details, as the USS Jimmy Carter is a powerful covert weapon. It is believed that military usage of the Jolly Roger dates back to 1914, when the British navy sank a German ship during World War I, the Mirror reported.

The lieutenant commander of that sub followed his success by affixing bars to the flag every time he had a successful action against the Germans, according to the book “Submarines at War 1939-45.” The book states that Lt. Cmdr. Max Horton started using the symbol because of insults from his superiors, who at the time looked down on the use of submarines in combat. They labeled those who used submarines, disparagingly, as pirates. But the insult was taken as a badge of honor, eventually gaining military men in submarines respect for their effectiveness in combat.

The photo of the USS Jimmy Carter was taken as the submarine crossed Hood Canal while returning to base at Kitsap in Washington state.

The Navy only has three classes of attack submarines. Besides the Seawolf class, there is the Los Angeles class and the Virginia class. Advanced capabilities and a unique feature distinguish the USS Jimmy Carter from the earlier Seawolf submarines.

“The third ship of the class, USS Jimmy Carter (SSN 23), has a 100-foot hull extension called the multi-mission platform. This hull section provides for additional payloads to accommodate advanced technology used to carry out classified research and development and for enhanced warfighting capabilities,” writes the U.S. Navy’s website.