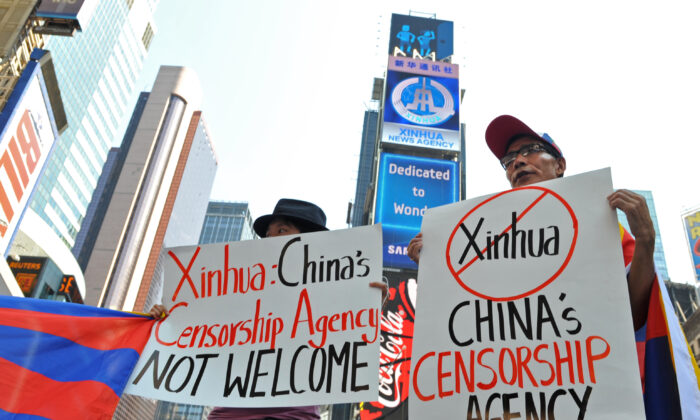 Students for a Free Tibet protest below a new electronic billboard leased by Xinhua (2nd from top), the news agency operated by the Chinese regime, as it makes its debut in New York's Times Square on Aug 1, 2011. (Stan Honda/AFP via Getty Images)
International Relations

The Chinese regime has been deploying “covert, corrupt and coercive” means to weaponize Chinese-language and Western media in a campaign to impose its vision of current affairs on the rest of the world, a recent French military think tank report has found.

Beijing’s efforts to export its narratives have been ongoing for decades. The first Chinese Communist Party-controlled English language newspaper, China Daily, was started in 1981. But such attempts had been clumsy and yielded slow results, according to Reporters Without Borders.

The year 2008 marked a turning point. The Olympic Games in Beijing, an event that the Chinese regime had hoped to leverage to showcase its economic success, gave rise to protests that disrupted torch relays in nearly a dozen cities around the world.

The humiliation Beijing suffered from the resulting negative coverage had stung the authorities. To better control the regime’s global image, the Chinese Communist Party (CCP) soon came up with a “10-year plan,” noted the report by the Institute for Strategic Studies of Military Schools (IRSEM), a think tank funded by the Ministry of the Armed Forces.

The 650-page study, which drew on public information, research reports, and independent interviews, examines how Beijing has been exploiting the openness of the West to amplify its propaganda narratives, forming one component of the regime’s sprawling influence operations globally.

The values of tolerance that characterize Western democracies have afforded Beijing “considerable freedom of movement,” allowing it to multiply its foreign offices, recruit foreign journalists to adapt its messages to different audiences, infiltrate local press with gifts and other material benefits, and dispense millions of advertising dollars on Western media to further expand its reach, the report states.

In China, rather than a watchdog meant to keep the government in check, the state-run press has become a tool that serves the Party, according to the report. That vision was made plain in a 2016 speech by Chinese leader Xi Jinping, during which he told around 180 state media representatives to align their ideology with that of the top officials, “speak for the Party’s will … and protect the Party’s authority,” according to a Xinhua readout.

To some Xinhua reporters, Xi’s coming to power had marked the beginning of a new era, in which the Chinese media “no longer need to be ashamed of being communist media,” a Xinhua reporter told one of the report authors in 2018.

Chinese state media are active on all social media networks, with a sizable influence on Twitter, Facebook, YouTube, and Instagram—all of which are blocked in China.

Chinese state media set up English- and regional-language pages on Facebook in 2013. Eight years later, they’ve topped the world’s media in terms of following, with four major outlets—CGTN, China Daily, Xinhua, and People’s Daily—having between 86 million to 116 million followers each at the time of the French report’s publication, or about 2.5 to three times larger than that of CNN’s.

These “spectacular scores” have been the outcome of a deliberate effort to artificially inflate subscriber numbers, the report authors said, pointing to the “exceptional growth rate” and the “extremely low interaction rate” these accounts receive.

According to the report, eight major Chinese state media in English have an average growth rate of 37.8 percent from the period Jan. 1, 2019, to March 31, 2020, or about 5,000 times higher than that of U.S. mainstream media. But their level of engagement is 68 times lower than their U.S. counterparts.

Tender documents dated 2018 and 2019 reveal that state-run outlets have been spending hundreds of thousands of dollars to acquire followers on Twitter and Facebook in what appeared to be a campaign to establish themselves as authoritative news voices.

“When … you see tens of millions of people following, then you feel like this is pretty credible,” Sarah Cook, a China analyst at human rights watchdog Freedom House, told The Epoch Times at the time.

Cook described it as a “new frontier” that’s “an avenue for accessing the grassroots in society and public in other countries.”

The proportion of fake accounts among their Twitter followers is hard to ignore: For an average Twitter user, between 5 and 30 percent of the accounts that follow them are bots or spam, but the fake account ratio for the four aforementioned media ranges from 34.3 percent to 38.4 percent. For their French versions, the numbers shoot up to as high as 62.8 percent, the researchers found.

CCP-controlled China Daily is pouring millions of dollars toward distributing its content through some of the most influential publications around the world. Between November 2016 and April 2020, China Daily paid nearly $19 million to U.S. newspapers to insert their free supplement, China Watch.

The collaboration has a three-fold benefit, the authors said. Not only does it help the Chinese media reach its target audience, but it also makes them appear more credible and gives them financial leverage over their partner media.

British newspaper The Telegraph, which had been receiving roughly £750,000 (roughly $1 million) per year until April 2020 to distribute China Watch, also carried at least 20 signed articles by the Chinese ambassador to the U.K. between 2016 and 2018—twice the number published by the Daily Mail, The Guardian, and Financial Times combined, according to a 2019 study published on Royal United Services Institute, a British defense and security think tank.

The U.S. State Department has designated a total of 15 Chinese state-run outlets as entities based in the country as foreign missions, because they’re “substantially owned or effectively controlled” by a foreign government, a department spokesperson told The Epoch Times in September.

In the case of state-run news agency Xinhua, its local journalists have the “sole mission of translating dispatches previously penned by Chinese staff,” the French report said. A French journalist for Xinhua told a report author in 2018 that their Xinhua dispatches were made up of 80 percent translations from English and 20 percent from Chinese. The translations and occasional original article would all be proofread by a Chinese journalist fluent in French and attuned to the “Party’s expectations as well as the ‘preferred stories,’” according to the Xinhua reporter.

Former staff members from pro-Beijing Hong Kong newspaper Sing Tao have recounted similar stories to The Epoch Times after the publication registered its five U.S. entities as foreign agents under orders from the Justice Department in August.

David, a former senior editor for Sing Tao’s New York office, said that he was briefed on “two principles” on his first day: no reporting of news on Falun Gong, a spiritual group persecuted by Beijing, or of Taiwan independence. Another former staffer, who worked for the outlet’s San Francisco office years ago, said she was told not to use the word CCP—the acronym for the Chinese Communist Party—nor “Republic of China,” the official name for the self-ruling island of Taiwan, which the regime claims as its own. Instead, she was told to use the words “China” and “Taiwan Province of the People’s Republic of China” respectively, she told The Epoch Times.

Acquiring foreign media, training journalists, donating gifts and equipment, applying diplomatic pressure, using visa blackmail, and leveling threats through phone calls are among some of the other tactics deployed by Beijing to reshape the media landscape overseas to bend to its will, according to the report.

Australian Chinese Media Self-Censoring Due to Fears of Reprisal From Beijing: Report

In South Africa, journalist Azad Essa saw his weekly column canceled from Independent Media, the country’s second-largest media group, hours after the publication of his September 2018 story condemning the persecution of Uyghurs in China’s Xinjiang region. The media group is 20 percent owned by two Chinese entities backed or controlled by Beijing.

The Hong Kong edition of The Epoch Times has been subject to a string of vandalism since its establishment, in what critics say bears the hallmarks of the regime’s intimidation tactics to silence independent reporting.

Due to fears of reprisal, Chinese-language media groups in Australia have chosen to actively self-censor, according to a September study by Sydney-based Lowy Institute.

“Politically sensitive topics or criticisms against the Chinese government would put our staff members or their families at risk. We don’t want them or their families to get detained in China,” one media proprietor told the think tank.

Correction: A previous version of this article misstated the amount that Chinese state media spend each year to distribute their content in Western media. The Epoch Times regrets the error.