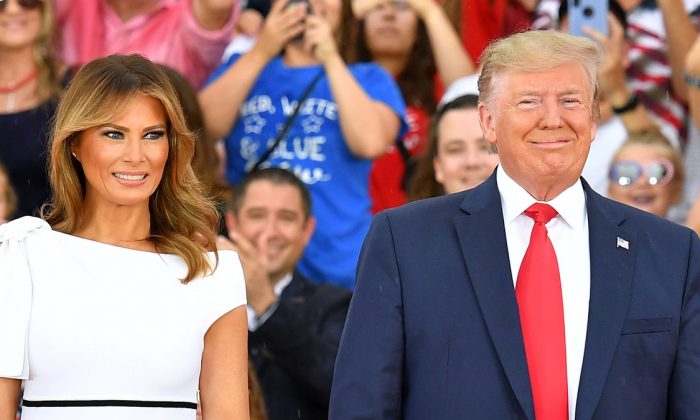 US President Donald Trump (R) and First Lady Melania Trump arrive for the "Salute to America" Fourth of July event at the Lincoln Memorial in Washington, on July 4, 2019. (Mandel Ngan/AFP/Getty Images)
US News

Fox did not follow other TV networks in stopping their live broadcast of Donald Trump’s 4th of July Salute to America speech at the Lincoln Memorial in Washington.

Nielsen Media Research reported that Fox attracted 4.6 million viewers, which the broadcaster said was its largest ever prime-time audience for Independence Day, attributing the spike to its broadcasting of Trump’s full speech according to The Blaze.

In comparison, MSNBC attracted 1.5 million while CNN only netted 374,000. MSNBC managed to recover some of its losses through its prime-time coverage of the Fourth of July fireworks show from New York City, which attracted 3.8 million viewers.

In the highly sought after demographic between 25- and 54-year-old viewers Fox secured 793,000 during the speech while CNN averaged just 353,000 in the same category according to The Hill.

The Media Research Center’s Newsbusters suggests viewers may have been turned off by CNN’s The Situation Room program, which “put on one of the most disgraceful displays of liberal media bias, Trump hatred, and slights at America you’ll ever see.”

Regardless of the coverage by certain media, Trump still intends to hold a similar 4th of July event in 2020.

“It was a wonderful day for all Americans and based on its tremendous success, we’re just making the decision and I think we can say we’ve made the decision to do it again next year,” Trump said at the White House on July 8 according to The  Hill. “And maybe we can say for the foreseeable future.”

There’s no better place to celebrate the 4th of July than Salute to America—and it’s open to all! 🇺🇸 https://t.co/gIXCG5mphq pic.twitter.com/lzAk27FI97

The crowd started chanting after Trump described his surprise victory in the 2016 U.S. presidential election as a “defining moment in America history” while pointing to the press box and referring to widespread media coverage that incorrectly predicted then-Democratic presidential candidate Hillary Clinton defeating Trump.

The audience loudly cheered in agreement after Trump commented about the high number of fake news media in the press box.

While Trump was still in the middle of speaking about the election being American voters’ chance to reclaim the government, CNN interrupted the speech and Anchor John Berman spoke over Trump.

“All right, we’ve been watching the president kick off his reelection bid, he’s been on stage for about six minutes,” Berman said in the broadcast. “Within two minutes he did talk about the economy, within four minutes it was attacks on the media.”

The anchor continued to speak over the president, criticizing Trump for raising the same issues he has discussed since the year 2015.

“He was talking about a bright, rosy future but then quickly reverted to some of the same themes he’s been talked about since he began running four years ago,” Berman said.

MSNBC also dropped live coverage of the president’s rally even though Trump was still delivering his speech to the crowd—only Fox News aired the full speech.