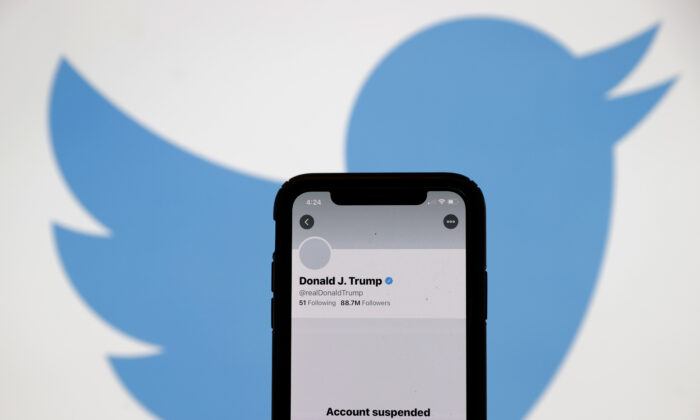 Former President Donald Trump is appealing the dismissal of his lawsuit against Twitter for violating his First Amendment rights by banning him from the platform, and one of his attorneys said the key issue is whether Twitter was acting at the behest of government officials to censor him.

Alex Kozinski, who is representing the former president, said the government can’t use a third party as a cat’s paw to get around the law.

Trump sued the social media company in July 2021 to challenge the ban, but in May 2022, U.S. District Judge James Donato for the Northern District of California dismissed the suit, stating that the First Amendment doesn’t apply to private companies.

A month and a half later, Trump filed an appeal with the 9th U.S. Circuit Court of Appeals.

Kozinski, himself a former judge on the 9th Circuit Court of Appeals, said there was a good deal of evidence presented to the district court suggesting that people in the government pressured the tech companies to censor Trump.

The legal question is whether the threats used by the government to coerce the tech companies are sufficient to be considered government action, he explained.

In some cases, the government coerces tech companies by threatening to pursue certain legislation, threatening to remove the protections of Section 230 in the Communications Decency Act, or threatening to hold anti-trust hearings, or even anti-trust prosecution, the attorney said.

Whether it’s the result of coercion or collaboration, this would be viewed as government action, Kozinski explained.

Kozinski estimated that it would take a year or so for the appellate court to make a determination in Trump’s case.

Politically motivated viewpoint restriction is the most serious First Amendment violation if it is done by the government, Kozinski said, and the government has never been permitted by the courts to favor one viewpoint over another.

“If the courts agree with us, I think this will be better for everybody, including internet service companies who will no longer be buffaloed and beaten up,” Kozinski said.

Also, government officials will realize that if they request internet service companies to censor speech, their actions could be considered government censorship.

In recent years, members of Congress have hauled the heads of tech companies into hearings and demanded that they implement more censorship of some viewpoints and users. If Trump’s case goes to the Supreme Court, and the court rules in favor of the former president, government officials will take notice and will probably be more careful about how they issue these demands to private companies, Kozinski said.

Lots of people have had their accounts shadow banned, suspended, or permanently deleted from social media platforms because they were expressing views that people in government did not like, Kozinski said.

Shadow banning is the practice of social media platform moderators suppressing the reach of a social media post or account without telling the owner of the account.

“That’s just not the American way,” he added.

Kozinski said the censorship of speech in the United States is too widespread and affecting too much of America’s national life for the Supreme Court not to eventually get involved.

“When it does [get involved], I think it will see things our way,” he said.

Censorship impacts not only the speaker but also those who are unable to hear the speech.

“If you disagree with Trump or anybody else, you can disagree. You can make an argument and explain why he’s wrong, and then people can make up their own minds,” Kozinski said. “When you censor someone’s speech, you not only censor the speaker, but you also censor everybody who would hear the speaker and make an intelligent judgment as to whether what he’s saying is correct.”

Kozinski said the government and tech officials engaging in censorship are probably concerned that too many people will agree with the speakers.

“They’re afraid that people will agree because if these are ideas everybody disagrees with, why bother censoring them?”

This is why dictatorships such as Nazi Germany and communist regimes such as the Soviet Union and the Chinese Communist Party have always been so keen on censorship, Kozinski said.

Censorship Is Not the American Way

“We’re entitled to speak without having the government leaning on people, leaning on the newspapers or service providers, saying ‘You can’t publish these views.’ That’s just not how we do things in America,” he said. “That’s how we should do things in Romania, where I was born. I actually lived under communism. I know what it’s like.”

In communist Romania, nobody believed anything printed in the newspapers because they were published by the government, Kozinski said. People got their news either from other people or from Radio Free Europe and shortwave radio, he said.

When getting the news or speaking with other people, Kozinski said they had to speak with a low voice and make sure nobody else was listening, because there were informants paid by the secret police who would report on others.

That’s what’s happening now in the United States, he said.

“The mainstream press is just completely under the control of basically the Democratic Party, and they will only say things that support that point of view,” Kozinski said. “And people are looking for other ways of expressing themselves, and certainly Twitter, YouTube, Facebook are among them.”

Warning for Supporters of Communism

Kozinski cautioned people who advocate for censorship in America against embracing communist policies.

“People who have not lived through communism … just have no conception of how government can suppress ideas, can suppress speech, can punish people, and just how bad things are when everything is controlled by the government.”

Kozinski thinks that many supporters of communism are idealistic.

He told a story of his father, who was communist and was persecuted for his beliefs. During the Second World War, he was sent to one of the worst concentration camps because of his communist beliefs and because he was a Jew, Kozinski said.

His father survived, and after the war ended, when the communist party seized power in Romania, Kozinski’s father actually saw communism implemented.

“Then he said, ‘I had no idea that’s how it would be.’ And that’s when he and my mother decided they had to take me out of there,” Kozinski said.

The whole family emigrated to the United States in the early 1960s, Kozinski said.

Kozinski said that people who believe in communism need to understand that it’s been proven again and again to be a false hope, a delusion, and a way to enslave people.

“Learn from history. Talk to people who have lived in the system. Don’t just theorize.”

Kozinski said that suppressing speech on social media is a foolish strategy because it’s a basic human trait for someone to want to think on their own, and not to just adopt whatever someone else tells them to think.

“[Censorship has] made a lot of people very angry and certainly hasn’t suppressed those ideas,” he said. “Because truth will out.”

Rita Li and Caden Pearson contributed to this report.