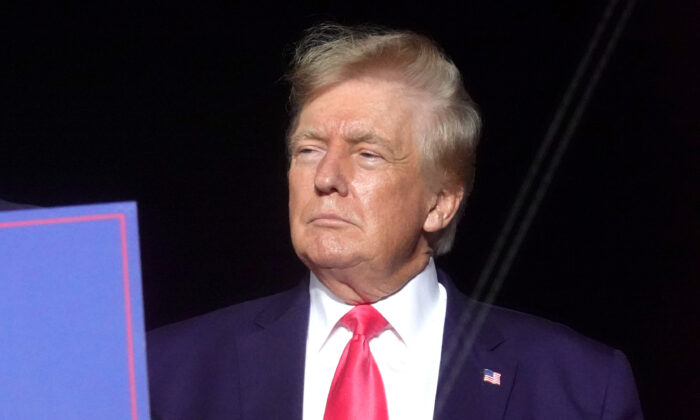 A judge on Sept. 8 tossed a lawsuit brought by former President Donald Trump against Hillary Clinton and a slew of others.

Trump sued Clinton, former British spy Christopher Steele, and several dozen others in March over Russian collusion allegations, alleging violations of the Racketeer Influenced and Corrupt Organizations Act (RICO). In an amended complaint several months later, he expanded on the accusations of a conspiracy.

But U.S. District Judge Donald Middlebrooks, a Bill Clinton appointee, said that the lengthy complaint “does not establish that Plaintiff is entitled to any relief” and that the claims presented in it “are not warranted under existing law.”

“I highlight here just two glaring problems with the Amended Complaint. There are many others. But these are emblematic of the audacity of Plaintiff’s legal theories and the manner in which they clearly contravene binding case law. First, the Amended Complaint’s answer to the Defendants’ Motion to Dismiss the original Complaint, wherein Defendants noted the lack of predicate RICO offenses, was to add another predicate offense—wire fraud,” Middlebrooks, who refused to recuse from the case, wrote in a 65-page order.

Trump also “fails to account for the Supreme Court’s requirement that to obstruct justice there must be a nexus to a judicial or grand jury proceeding,” he added later.

The judge said that the way many events were characterized in the amended complaint “are implausible because they lack any specific allegations which might provide factual support for the conclusions reached,” including the characterization that former FBI Director James Comey and other government officials “overzealously targeted” Trump.

Trump and his campaign were investigated by the FBI for years over the dossier compiled by Steele, which was paid for by Clinton and other Democrats. The dossier contained many claims that have remained unsubstantiated to this day. The FBI operation was called Crossfire Hurricane. Investigators made serious errors and omissions in its probe, the Department of Justice watchdog has found, including manipulating an email.

While the amended complaint correctly referenced the watchdog report, it failed to acknowledge the conclusion that “we did not find documentary or testimonial evidence that political bias or improper motivations influenced his decision—we found that Crossfire Hurricane was opened for an authorized investigative purpose and with sufficient factual predicate,” Middlebrooks said.

He dismissed the complaint without prejudice, which means Trump can refile in the future.

“We vehemently disagree with the opinion issued by the Court today. Not only is it rife with erroneous applications of the law, it disregards the numerous independent governmental investigations which substantiate our claim that the defendants conspired to falsely implicate our client and undermine the 2016 Presidential election. We will immediately move to appeal this decision,” Alina Habba, a lawyer for Trump, told The Epoch Times in an email.