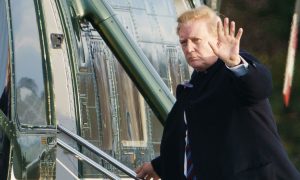 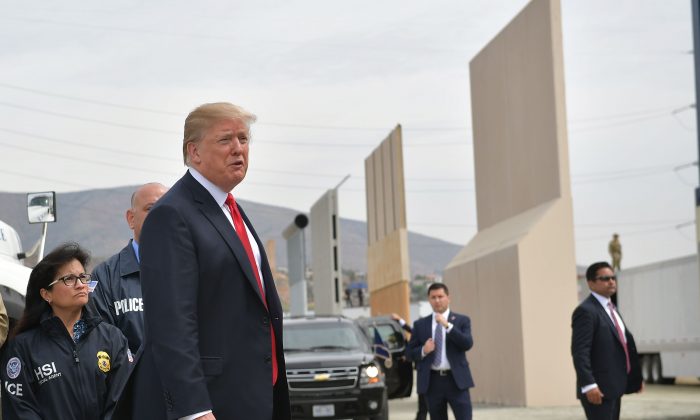 Court Sides With Trump in Dispute Over Border Wall Construction

An appeals court sided with President Donald Trump’s administration, upholding a decision by a lower court that the administration has the authority to waive some laws to expedite border wall construction projects.

The Ninth Circuit Court of Appeals issued the ruling (pdf) on Feb. 11.

Two of the three judges supported the previous decision, noting that the Department of Homeland Security has authority under the Immigration Reform and Immigrant Responsibility Act of 1996 to construct portions of a border barrier to replace 14 miles of fencing near San Diego.

Another portion that was in question was a 3-mile strip near Calexico, also in California.

“The Secretary of the Department of Homeland Security has long had the authority ‘to install physical barriers and roads … in the vicinity of the United States border,'” wrote Judge Margaret McKeown, who was nominated by former president Bill Clinton.

“The Secretary also ‘ha[s] the authority to waive all legal requirements’ that, in the ‘Secretary’s sole discretion’ are ‘necessary to ensure expeditious construction’ of those barriers and roads.”

She later added that the Secretary has the authority to install any barriers or roads on or near the border “to deter illegal crossings in areas of high illegal entry into the United States.” Data indicates that the San Diego and Calexico areas are indeed areas of high illegal entry, with some 31,000 illegal aliens began apprehended in the San Diego Border Patrol Sector in the 2016 fiscal year alone.

Agents also seized over 9,100 pounds of marijuana and 1,317 pounds of cocaine.

Environmental groups and the state’s new attorney general, Xavier Becerra, a Democrat, filed the suit against the administration.

The groups claimed that the two areas were not areas of high illegal entry. They didn’t dispute the numbers but said they weren’t comparatively high when measured against other sectors. The law, however, does not distinguish evidence of “high illegal entry” by way of comparison, McKeown wrote.

The third judge said that she dissented only because she felt that the law restricted the appeals court from hearing such cases and that it should have been reviewed by the Supreme Court.

The groups tried to get the nation’s highest court to hear the case but the Supreme Court declined in December 2018.

Responding to the ruling, Becerra told the San Francisco Chronicle: “We are disappointed with the ruling, but pleased that the court recognized the Trump Administration does not have unlimited power and that the administration’s authority to build a barrier along our border is subject to judicial review.”

The Department of Justice also responded.

“Congress has given the executive branch significant authority to build physical barriers on our border,” a spokesman said. “Today the court has affirmed that authority, and that is a victory for the Trump administration, for the rule of law, and above all, for our border security.”

The decision came as Trump traveled to El Paso, a border city, on Monday to garner support for the wall.

Trump told the crowd that regardless of what Congressional negotiators came up with, “the wall is being built.”

The president also hit back at critics who called the existence of a physical wall “immoral.”