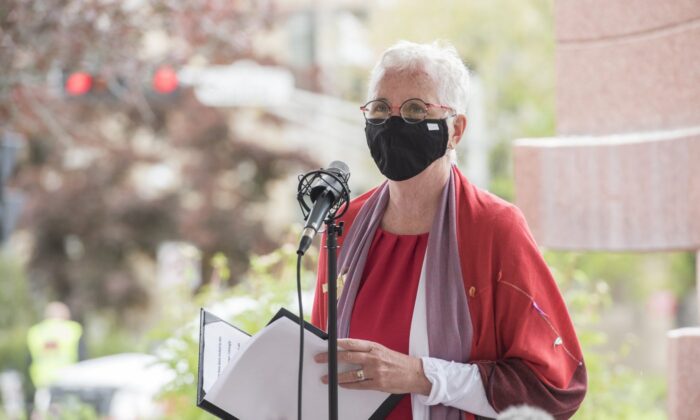 Prime Minister Justin Trudeau violated constitutional language protections when he appointed a unilingual anglophone lieutenant-governor of New Brunswick, but striking down the nomination would cause a constitutional crisis, a court ruled Thursday.

While the 2019 appointment of Brenda Murphy as lieutenant-governor of the officially bilingual province violated the rights of the province’s minority francophones, New Brunswick Court of Queen’s Bench Chief Justice Tracey K. DeWare wrote that it will be up to the federal government to decide what to do next.

“The court cannot issue a declaration which could undermine countless lawfully enacted pieces of legislation, appointments and decrees. Such a situation would create a legislative and constitutional crisis within the province of New Brunswick,” DeWare wrote, adding that she believes her ruling “is sufficient to ensure appropriate and prompt action on behalf of the government to rectify the situation.”

The Acadian Society of New Brunswick had challenged Murphy’s appointment, arguing that naming a unilingual anglophone to the role violated several constitutional language protections aimed at ensuring equality between the province’s two linguistic communities, including the right to communicate with the government in either official language.

DeWare found that the lieutenant-governor must speak both English and French in order to carry out her duties as the province’s head of state, as well as to interact with citizens.

“It will be understandably difficult, if not impossible, for a unilingual anglophone lieutenant-governor to converse and interact with francophone citizens,” she wrote. “A unilingual lieutenant-governor will experience significant difficulties in delivering a speech from the throne with equal attention given to both official languages. Can such a situation really be deemed to represent equality of the linguistic communities pursuant to the charter? In my view, it cannot.”

However, DeWare found that the “extremely unique character and constitutional quality of the role” requires the individual who holds it to be bilingual.

“Compliance with the charter does not require any government employee, minister, judge, premier or prime minister to be bilingual,” she wrote. “However, these individuals can all be replaced by someone else in the execution of their functions, (and) a lieutenant-governor cannot. There is only one head of state.”

New Brunswick is the only province where official bilingualism is enshrined in the federal Constitution, DeWare noted.

Alexandre Cédric Doucet, president of the Acadian Society, described the ruling as “wonderful news for the French language.”

Doucet said the court challenge wasn’t aimed at Murphy personally, but was about ensuring that the nomination process respects the Constitution. He said he hopes Ottawa responds to the ruling by amending a bill currently before Parliament that would update the Official Language Act. Doucet said the bill should amended to include language requiring New Brunswick’s lieutenant-governor to speak French.

Parliament could also adopt a Senate bill that would modify the Language Skills Act—which establishes bilingualism requirements for certain senior public servants—to include the lieutenant-governor of New Brunswick and the Governor General, he said.

Asked whether Murphy should be replaced, Doucet said, “that’s a question that the federal government will have to answer, because for us the important thing here is the process.”

“While we will be taking time to review this decision and consider next steps, we remain committed to protecting and promoting French everywhere in the country and advancing our linguistic duality,” Chantalle Aubertin, a spokeswoman for Lametti, wrote in an email.

Murphy’s office declined to comment on the decision, as did the office of New Brunswick Premier Blaine Higgs.