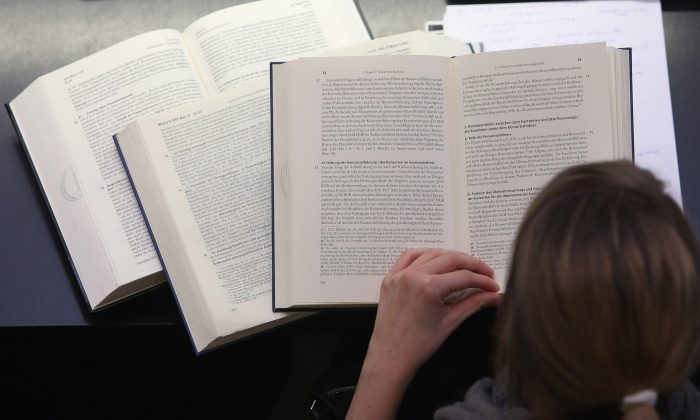 'School Board Did Not Cure the Violations'
By Patricia Tolson

In Collier County, Florida, a citizens group and three parents challenged the process used by the school board to adopt textbooks they believe contain Critical Race Theory. On Friday, a court ruled that the process was in violation of Florida Sunshine Laws.

“The Sunshine Law applies to the Textbook Committees, and the failure to give reasonable notice to the public of their meetings resulted in violations of the Sunshine Law,” reads the conclusion by the Second District Court of Appeal of Florida. “Further, the School Board did not cure the violations. Therefore, as to the dismissal of count one, we reverse the final judgment and remand to the trial court. We otherwise affirm the final judgment as to the dismissal with prejudice of the remaining counts.”

“We filed the original lawsuit on May 31, 2017,” Keith Flaugh, founder of Florida Citizens Alliance (FCA) told The Epoch Times. “The lawsuit covered a number of issues, including a request for an injunction. Other issues dealt with how the school board violated Florida’s Sunshine Laws through the process they used to evaluate and adopt the textbooks.”

“We initially filed an emergency injunction to stop the school district from purchasing the textbooks,” Brantley Oakey, the attorney representing the citizens group and parents told The Epoch Times. “That was denied.”

Oakey himself was one of the three parents listed as plaintiffs in the lawsuit.

Since FCA is a non-profit entity with no children in the school system, Flaugh said he needed parents to join in on the lawsuit in order for the case to “show the court sufficient connection to and harm from the law or action challenged.”

According to Flaugh, “a number of back-and-forths between the attorneys” took place in the years that followed their initial filing in 2017. It was during this time Flaugh lost hope and “stopped paying attention.” Funding had also run out.

“But Brantley was so convinced we had a really good case regarding the violation of the Sunshine Laws, he decided to go forward on a pro bono basis,” Flaugh noted, saying Oakey worked over another 100 hours on the case with no payment.

“The next thing I knew, last Friday, he said: ‘Congratulations. We won!’”

As explained on the website for Florida Attorney General Ashley Moody, “Florida’s Government-in-the-Sunshine law provides a right of access to governmental proceedings at both the state and local levels. It applies to any gathering of two or more members of the same board to discuss some matter, which will foreseeably come before that board for action. There is also a constitutionally guaranteed right of access. Virtually all state and local collegial public bodies are covered by the open meetings requirements with the exception of the judiciary and the state Legislature which has its own constitutional provision relating to access.”

“The community was blindsided when the school board passed all these textbooks,” Oakey explained. “I think there were 36 they approved, and nobody knew when they had reviewed them. Then we found out they had put together a bunch of different committees from people in the public and there was a scandal about that as well because all of the prominent conservatives were left out.”

According to Oakey, the meetings were overseen by Jennifer Kincaid, the executive director of Elementary Programming for Collier County.

The Epoch Times reached out to Collier County Public Schools (CCPS) for a statement regarding the private meetings and the ruling that these private meetings violated Florida Sunshine Laws. Collier County Public Schools Communications & Community Engagement Specialist Jennifer Kupiec replied, saying “the school district does not comment on pending litigation.”

In a follow-up email, Communications & Community Engagement Executive Director Chad Oliver told The Epoch Times “that issue relates to a 2017 Instructional materials adoption,” and proceeded to explain how procedures in 2020-21 were “in alignment with the state’s adoption cycle and transition to new B.E.S.T. Standards”

However, Oakey countered that adjusting procedures to conform with state law during the 2020-21 textbook adoption cycle has nothing to do with procedures they used for the “2017 Instructional materials adoption.”

Oliver further stated that objections to the textbooks approved by the committees were received by the school board “and a hearing on the objections was held on June 7, 2021.”

According to Oakey, over 100 meetings were held by the committees before the textbooks were approved and passed on to the school board at the public meeting, which in turn “ratified the decisions with no discussion whatsoever.”

“Subsequently, a Special Meeting was then held on June 14, 2021 with public input,” Oliver continued. “The Board affirmed the adopted textbooks. The instructional materials were determined to be aligned with state standards and statutory requirements for instruction. All of these meetings were properly noticed and held in the public in accordance with Florida Sunshine Law. Further, it was determined that there was no evidence of Critical Race Theory present in these materials.”

Not so, according to Oakey.

“They didn’t name a single textbook,” Oakey insisted. “They didn’t discuss any of them. The school board had no idea what was in them. They just passed them. So we ended up bringing a lawsuit for a Sunshine Law violation stating they had violated that law by not making those committee meetings open to the public so the public could attend and witness that.”

“Finally, for clarification purposes, Ms. Kincaid, was not involved in this 2020-21 school year textbook adoption,” Oliver insisted. Oliver did not, however, disclose who did oversee the private committee meetings.

‘Someone Has to Step Up’

“I’m a concerned parent,” Eric Konuk, one of the plaintiffs and a father with one 10-year-old son and two 16-year-old twins in the Collier County school system told The Epoch Times. “I got involved because I see what’s going on. I recognize what’s going on and somebody has to step in and do something.”

“Frankly, I was tired of having my kids indoctrinated with revisionist history and these tenets of social Marxism,” he said. “We’re always told diversity is our strength, and it is if we focus on ‘E pluribus Unum’ meaning ‘out of many, one.’ But that’s not the focus. The focus is always on those things that divide us. I’m tired of the cultural Marxism tactics being deployed in our school systems with the materials that are being put in front of our kids, and it’s intentional. There’s no doubt about it. This is all driven by an agenda that has been crafted, in the works, and fine-tuned over many, many decades.”

“You have teachers who have carte blanch to bring in material into the classroom,” Doug Lewis, another parent in the lawsuit told The Epoch Times. “There’s no limit on what they can do. Not that all teachers do,” he conceded. “We have some really great teachers. But we know there are teachers who are bad apples and we know there are teachers that have an agenda and when you have a lack of control you create an opportunity for problems” and “you end up with instruction occurring in the classroom that is politically biased.”

“There are publishers out there, and they have their agenda,” Lewis said, a reference to Houghton Mifflin Harcourt (HMH) and their known “commitment” to Black Lives Matter.

On June 8, The Epoch Times reported how MHM—publishers of textbooks the school board approved at the June 14 meeting—declared on its own website a “commitment” to Black Lives Matter (BLM) and “social justice.”

The Collier County School Board was made aware of this during a June 7 meeting by Collier County School Board Vice-Chair Jen Mitchell, who said she learned of the “commitment” through an email she received from a concerned citizen. Mitchell further revealed that one of BLM’s greatest advocates in the education field—Dr. Tyrone Howard—had been given a platform to promote the principles of CRT and his support for BLM through the HMH blog site.

“They wound up buying the textbooks anyway,” Lewis said.

“The next step is we are going to file a motion to have the trial judge amend their final judgment to conform with what the appellate court ruled so they will have to amend the final judgment to say the defendant (the school board) actually violated the Sunshine Laws,” Oakey explained.

With the court’s ruling in their favor, Oakey said they are seeking to be reimbursed for all attorney’s fees and an injunction ordering the school not to use the same closed-door procedure for textbook review and adoption in the future.

“And while the plaintiffs have yet to discuss what other relief they will request,” Oakey added, “we did ask that after the court finds they violated the Sunshine Laws that their ruling of the textbooks is void, ab initio. So we have reserved the right to go back and have the court order them to remove all of the textbooks and start over from square one in the evaluation process.”