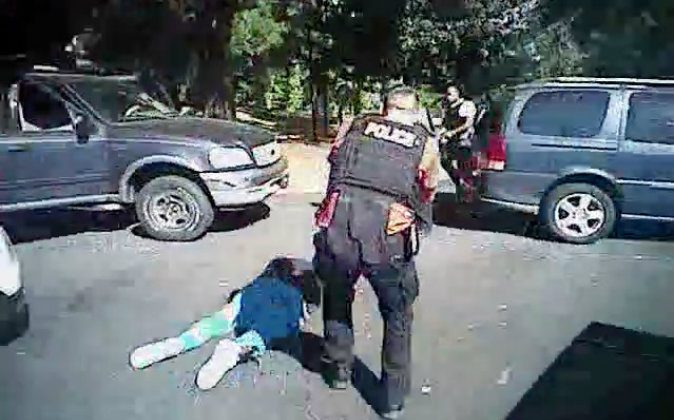 The wife of Keith Scott—the Charlotte man whose officer-involved shooting death triggered protests and riots across the city last week—filed a restraining order against her husband in October 2015, according to local media reports.

“He hit my 8-year-old in the head a total of three times with his fist,” and “he kicked me and threaten(ed) to kill us last night with his gun,” reads the restraining order from Rakeyia Scott, according to local station WCNC. “He said he is a killer and we should know that.”

When the restraining order form asked if law enforcement should consider Keith Scott a threat, Rakeyia Scott marked “yes,” adding that he carries a “9mm black,” likely making reference to a gun.

Scott also did not have a permit for the gun referenced in the restraining order, WSOC-TV reported.

Charlotte police have released a photo of a gun they say Keith Scott had on him when he was shot. https://t.co/waxeROfWX1 pic.twitter.com/IsyL954q5r

The restraining order was dropped about 11 days after it was filed last October.

Meanwhile, it has been reported that the gun police claimed to have found on Keith Scott, 43, was reported stolen before he was shot and killed. Police sources told WBTV that an unidentified burglar allegedly stole the firearm during a break-in at a residence sometime before the Sept. 20 shooting. The sources added that the burglar admitted to selling the gun to Scott.

Charlotte to Release Body and Dash Camera Video of Shooting

Videos showing the moment Charlotte officers opened fire on Scott were released following his death. The clips do not show conclusive evidence he was holding a gun as police have claimed.

Police released footage from a dashboard camera and a body camera on one of the police officers. However, the lone officer who wore the camera didn’t activate it until Scott was shot and on the ground, the Washington Post reported.

A spokesman for the body camera company that supplies the Charlotte-Mecklenburg PD told the Post the body cameras police wear are constantly recording video, but not sound. None of the video is saved until the camera is activated. When an officer activates the camera, sound is then active and the previous 30 seconds of silent footage is saved.

Brently Vinson, the officer who shot him, wasn’t fitted with a camera.

“Officer Vinson perceived Mr. Scott’s actions and movements as an imminent physical threat to himself and the other officers. Officer Vinson fired his issued service weapon, striking Mr. Scott,” a release from the Charlotte police department states. “Officers immediately rendered first aid and requested Medic to respond to the scene.” It added that officers saw Scott in possession of a gun, telling him to drop it.