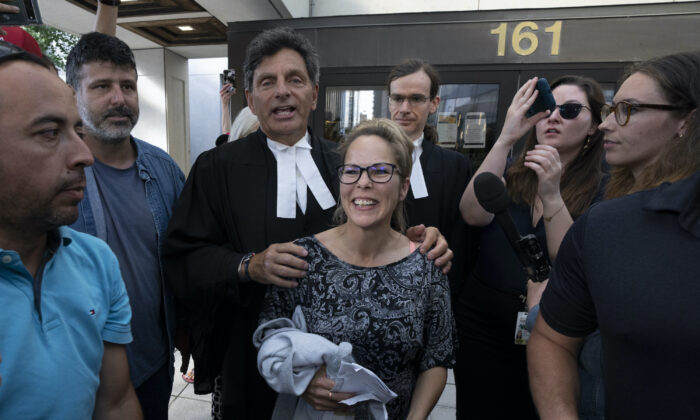 Freedom Convoy organizer Tamara Lich smiles as she stands with her lawyer Lawrence Greenspon as they leaves the courthouse after being released on bail, in Ottawa on July 26, 2022. (The Canadian Press/Adrian Wyld)
Canada

An Ontario court has granted bail to Freedom Convoy organizer Tamara Lich following a new bail hearing on July 26. During a bail review held earlier in the day, a judge said a previous decision by another court to detain her was “clearly inappropriate.”

Ontario Superior Court Judge Andrew Goodman said on July 26 that apart from the “impugned breach” of bail terms at a June 16 award ceremony in Toronto, Lich has “fully complied with her conditions for a period of nearly four months,” including prohibition from using social media and prohibition from organizing further protests.

She was ordered to return to her residence in Medicine Hat, Alberta, and is not allowed to set foot in Ottawa except for court appearances. Except through her legal counsel, Lich is again prohibited from contacting organizers and key figures of the Freedom Convoy, including Tom Marazzo, Christopher Barber, Daniel Bulford, Benjamin Dichter, among others. Her release also required another $37,000 bond.

Lich is not prevented from giving interviews or speaking to the media, as long as she doesn’t breach bail conditions of promoting the Freedom Convoy.

Lich, who was initially arrested in February and stayed in custody for 19 days before being granted bail, was kept in jail for 30 days since her re-arrest on June 27.

She was brought to court in shackles, which the judge ordered to be removed once she was granted bail.

Lich was rearrested in Medicine Hat on June 27 under a Canada-wide warrant for allegedly breaching her bail conditions of having no contact with fellow convoy organizers.

Crown prosecutors alleged that Lich breached her bail conditions during a June 16 award ceremony in Toronto, where she was presented with the 2022 George Jonas Freedom Award from the Justice Centre for Constitutional Freedoms.

The Crown presented as evidence a photograph of Lich and a fellow convoy organizer Tom Marazzo taken at the event, and a video briefly showing Lich sitting at a table where Marazzo and others were seated.

Lich’s defence had argued that the “less than three-second congratulatory interaction” after Lich had delivered a speech at the awards dinner wouldn’t lead to any illegal activity.

Following a series of bail hearings, the Justice of the Peace Paul Harris said on July 8 that he was siding with the Crown in that Lich chose to sit at a table with Marrazo and that it was “absolutely ridiculous” for her to believe she could justify interacting with Marazzo by having her lawyers in the room. Lich’s bail terms specified that there should be no communication with convoy organizers except in the presence of counsel.

The court heard testimony that her lawyers, who were present at the June 16 event, approved of the picture taken of Lich and Marazzo.

Harris also said Lich continues to pose a risk to public safety, as some Freedom Convoy protests are still being held in Ottawa from time to time.

Defence lawyers later filed for a bail review, which began on July 25.

Goodman ruled during the bail review that preceded the bail hearing that the previous court had made “erroneous” conclusions and “misapprehended” the evidence against Lich when deciding she broke her bail conditions on July 8. The court next moved directly to a new round of bail hearings—de novo—in the afternoon.

Goodman said that the belief that an individual will commit a criminal offence does not in itself provide justifiable cause for detention, and that bail should be denied only for those who pose a substantial risk of committing an offence or interfering with the administration of justice.

He added that he was not aware of any other legal case in Canada “in the past 25 years” where the Crown recommended “a maximum sentence of 10 years for mischief over $5,000, or even a penitentiary sentence for that matter.”

Goodman said that there was no evidence showing that Lich has done anything in relation to the alleged breach “that would endanger the protection or safety of the public” and would lead to a violation of her bail terms.

Goodman also said he found it an “overstatement” when Harris asserted in a previous hearing that “the vulnerable victims of the February freedom trucker convoy protests undoubtedly will continue to fear a reoccurrence of the protests if persons such as Ms. Lich and Mr. Marazzo are allowed to continue to communicate and socialize in whatever manner they deemed legitimate.”

He further noted that it is not reasonable to believe that the two convoy organizers’ interaction lasting less than three seconds while in public, as well as a group photograph, would reasonably cause such fear regarding a potential breach.

He also said Harris made a legal error in sustaining the notion that the onus was on Lich to provide evidence at the bail hearing that there was legal counsel present at the June 16 event where she and Marazzo interacted.

Lich, who has remained in custody since her recent arrest on June 27, is facing trial for her role as a key organizer of the truckers’ Freedom Convoy protest held for more than three weeks at Ottawa’s downtown core to protest the federal COVID-19 vaccine mandates.

Lich was first arrested on Feb. 17 on charges of mischief, counselling to commit mischief, obstructing police, among other charges, after the Liberal government invoked the Emergencies Act to quell the protests.

After initially being denied bail, Lich was released in March on a number of conditions, including having no contact with fellow convoy organizers.