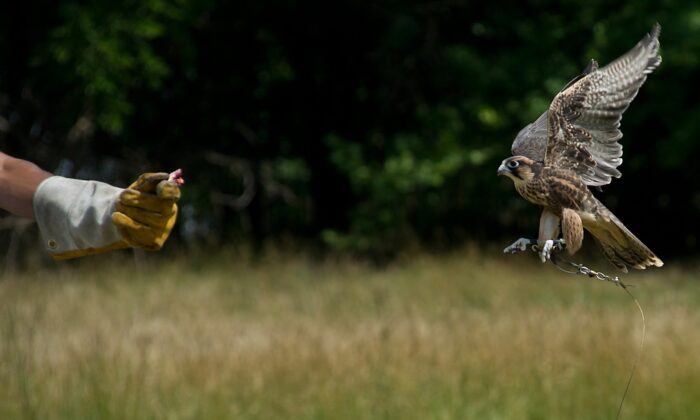 A Lanner Falcon flies to its trainer's arm at a bird sanctuary in Laurel, Md., on June 14, 2012. (KAREN BLEIER/AFP/GettyImages)
US News

A group of falconry enthusiasts will be allowed to pursue their lawsuit against federal and state authorities challenging “speech codes for birds” and in which they claim government inspectors routinely run roughshod over their constitutional rights.

A federal judge threw out the government’s request last week to dismiss the lawsuit, which can now move forward against the U.S. Fish and Wildlife Service and California Department of Fish and Wildlife.

Peter and Katherine Stavrianoudakis, Scott Timmons, Eric Ariyoshi, and the American Falconry Conservancy filed the federal civil rights action in an attempt to roll back regulations they consider intrusive.

Falconers have few legal rights and are subject to strict regulations, according to Pacific Legal Foundation, a Sacramento, California-based public-interest law firm. In order to be licensed as a falconer, you have to agree to waive certain rights.

Federal law forbids the making of profit from licensed birds of prey, but not other exotic birds, such as ostriches or toucans. Falconers are allowed only to charge what their costs are for any presentations they make. The law prevents falcon owners from using their falcons in “movies, commercials, or in other commercial ventures that are not related to falconry.”

The falcons’ images cannot be used in logos or to endorse any kind of product unless it is related to falconry. Government rules also tightly regulate what a falcon owner can say about his falcon to another person.

Government agents are allowed to show up at falconers’ homes unannounced and demand to carry out searches without a warrant, violating their privacy rights. Reasonable suspicion of illegal behavior or mistreatment of the birds is not required. If the agents don’t like what they see, they can threaten to take the falcons away.

“In short, they’ve created a regulation that says the Fourth Amendment doesn’t apply to a citizen engaged in the sport of falconry,” plaintiff Peter Stavrianoudakis told Reason last year. “I’m treated no differently from a common felon on parole.”

“To threaten to take birds away, for falconers, it’s like a child protective services agency threatening to take your kids away,” Timothy Snowball, the lead attorney on the case, told The Epoch Times. Snowball works for Pacific Legal Foundation.

“I’ve been shocked by the horror stories about how the rules have been enforced over the years.”

“Every American, including falconers, should have the right to be safe and secure in the privacy of their own home without being afraid of armed agents coming into their homes.”

The judge’s order last week cleared the way for the lawsuit to proceed.

In an order sporting bird puns such as “Toucan, of course, play at this game,” U.S. District Judge Lawrence O’Neill of the Eastern District of California ruled Jan. 24 in Stavrianoudakis v. U.S. Fish and Wildlife Service to dismiss Fourth Amendment claims but allowed First Amendment claims.

O’Neill found that licensed falconers possess a First Amendment right to express themselves with their raptors that is subject to the strictest constitutional scrutiny, and that the plaintiffs’ claim that the federal government exceeded the scope of its authority to enact the speech restrictions can also proceed.

He didn’t rule on the Fourth Amendment claims because the plaintiffs haven’t recently suffered warrantless searches.

“In terms of the First Amendment, that is an absolute win,” he said. The arguments about “content-based prohibitions” made by the federal and state governments were rejected.

O’Neill has not yet ruled on the plaintiffs’ motion for a preliminary injunction to halt enforcement of the regulations while the case is pending because, Snowball said, the judge first wants to see the defendants’ justification for violating licensed falconers’ First Amendment rights.

The court wrote that “the Federal and State Defendants’ briefing does not explain how the regulations are not more extensive than necessary to serve an important state interest.”