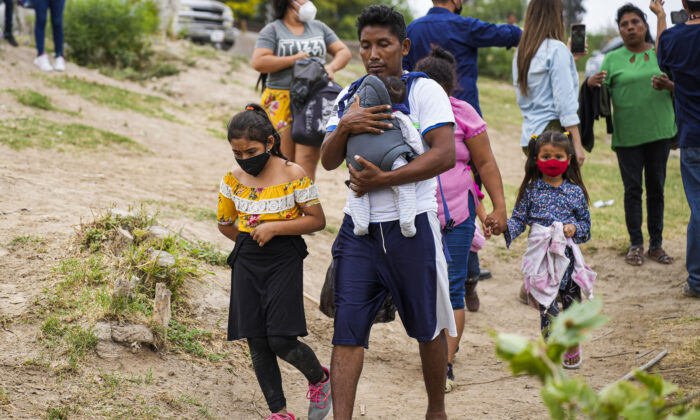 A federal judge on April 25 is set to block President Joe Biden’s administration from ending an emergency order that has been helping officials control the U.S.–Mexico border.

U.S. District Judge Robert Summerhays, a Trump appointee, told parties during a closed status conference that he intends to grant a motion for a temporary restraining order, according to minutes of the meeting released by the court.

“The parties will confer regarding the specific terms to be contained in the temporary restraining order and attempt to reach agreement,” the court reporter said.

Louisiana Attorney General Jeff Landry, a Republican and one of the plaintiffs, celebrated the judge’s ruling.

“Joe Biden’s reckless decision to rescind Title 42 would have flooded our already stressed southern border with illegal immigrants,” Landry told The Epoch Times in a statement. “Fortunately, today a judge has granted our request to halt this enormous threat to our national security.”

Missouri Attorney General Eric Schmitt, a Republican and another plaintiff, called the ruling a “big win!”

Arizona, Louisiana, and Missouri on April 4 lodged a complaint against the government over its announced ending of Title 42, an emergency order that enables immigration agents to quickly expel illegal immigrants because of concerns the immigrants have COVID-19.

The order has been in place since early 2020 but the Centers for Disease Control and Prevention, with support from the Department of Homeland Security and the White House, announced in early April that it would terminate the order in May.

In a motion for a temporary restraining order, the attorneys general noted how U.S. government officials and the Border Patrol union say the administration is already scaling back its use of Title 42 and told the court that entering the order would force the administration to keep the powers in place while the case is being decided.

“Federal Defendants’ monopoly on information about what actions they are taking frustrates both the States’ ability to seek relief against the irreparable harms they will otherwise incur and this court’s authority to grant relief if it concludes that the termination order is unlawful,” the plaintiffs said.

“Once the Order is put into effect—even partially—few if any of the resulting harms can ever be remedied by this Court. That is particularly true as money damages are not available and it is doubtful that this Court could effectively rescind unlawful grants of asylum or parole into the U.S. Indeed, the irrevocable nature of the harms that the Title 42 Termination will cause is precisely why the bipartisan calls for abandonment or delay of the Order have been so resounding.”

Members of Congress from both parties have thrown support behind legislation that would force the government to keep Title 42 in place until Biden rescinds the COVID-19 national state of emergency, including a major bipartisan caucus and Sens. Mark Kelly (D-Ariz.) and James Lankford (R-Okla.).

White House press secretary Jen Psaki declined to say during a briefing in Washington whether Biden would sign the bill if it reaches his desk.

“There’s a lot of steps between now and then, so at this point that’s very premature,” she said.