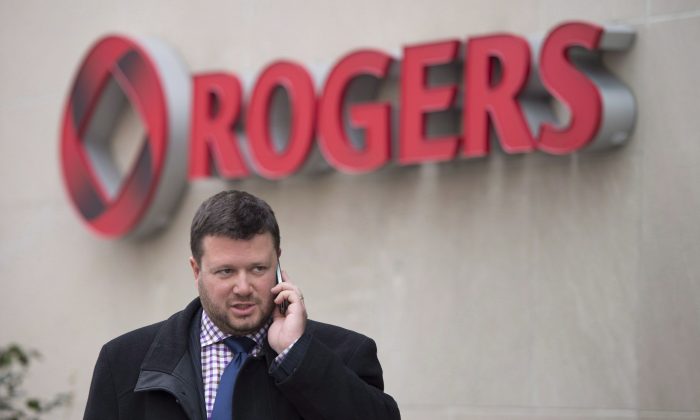 A man speaks on a mobile phone outside the Rogers Communications Inc.’s annual general meeting of shareholders in Toronto on April 22, 2014. An Ontario court’s approval for Rogers to buy Mobilicity is expected to trigger a series of transactions that affects wireless customers in three provinces. (The Canadian Press/Darren Calabrese)
Canada

TORONTO—An Ontario court gave its approval for Rogers Communications to buy Mobilicity for about $465 million on Wednesday, June 24, a deal that is expected to trigger a series of transactions that affects wireless customers in Ontario, Alberta, and British Columbia.

Rogers will also sell some spectrum to Wind Mobile, which has emerged as one of the leading challengers to Canada’s three biggest wireless companies, and complete a previously announced purchase of spectrum from Shaw.

Rogers said its takeover offer for Mobilicity has also been approved by Industry Canada, which had blocked previous attempts for Telus to buy Mobilicity. It still requires approval from the Competition Bureau.

Judge Frank Newbould of the Ontario Superior Court cited an old English proverb to describe the near-end of Mobilicity’s two-year search for a suitor.

This will be the end of a long saga that will help strengthen the Canadian wireless industry.
— Mobilicity chief restructuring officer William Aziz

“There have been many slips from the cup to the lip, but it finally looks like we’ve got it,” Newbould told the court in his decision after a brief hearing in Toronto.

Mobilicity operates in five urban markets: Ottawa, Toronto, Calgary, Edmonton, and Vancouver. Wind Mobile also competes in those cities and has about 800,000 customers, which is about one-tenth the subscriber base of any of the big three carriers—Rogers, Telus and BCE’s Bell.

Rogers chief executive Guy Laurence said in a statement that the company “got the spectrum we needed” while working with the government to put unused spectrum to work.

Wireless spectrum, which is essentially a radio frequency, is a prized asset for any carrier because it’s one of the crucial pieces of the service it provides customers.

William Aziz, the chief restructuring officer who has led the process since April 2013, said the Rogers offer was the highest price and “most executable” option for Mobilicity.

“This will be the end of a long saga that will help strengthen the Canadian wireless industry,” he said after the decision.

The federal government had blocked Telus over concerns that one of Canada’s three large national carriers would acquire wireless spectrum that had been set aside for newer companies, including Mobilicity.

But Aziz said his recent interaction with Industry Canada left him with the impression the government agency no longer has the same concerns it once did about spectrum concentration among a small number of Canadian wireless carriers.

A Telus representative said the company wouldn’t comment on the announcements, while a spokesman for Industry Minister James Moore said he expected a statement would be issued later Wednesday.

Rogers said the purchase price will be offset by tax losses valued at about $175 million that the company will acquire.

Rogers said it would also pay $100 million to Shaw, in addition to earlier down payments, to complete a previously announced purchase of spectrum that the Calgary-based company hasn’t used.

Shaw originally planned to set up its own wireless business but later decided to take a different strategy that doesn’t require the spectrum.