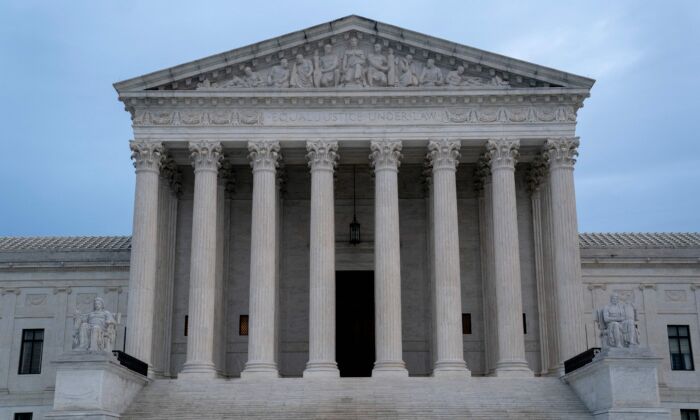 Court and Congress Hammer Out Truce on Gay Rights

America could finally be on its way to hammering out a truce between advocates for same-sex marriage and religious opponents who want no part of it. It’s a tall order.

Congress is the architect of one part of the truce. The Senate is advancing a bill, with bipartisan support, to ensure that a same-sex couple’s marital status and benefits will be secure in all 50 states. The goal is to get it signed into law before Congress adjourns.

Meanwhile, on Dec. 5, the U.S. Supreme Court will be hearing a case about Colorado website designer Lorie Smith, who wants to customize websites celebrating weddings, but not same-sex weddings.

Colorado law requires businesses to serve all customers, regardless of race, ethnicity, or sexual orientation. Smith is fine with that. She says she has never turned away gay or lesbian customers. But she draws the line at creating websites for same-sex marriage.

Smith wants to post a sign saying she will design websites only for marriages between one man and one woman, consistent with the teachings of the Bible.

The Colorado Civil Rights Commission says “no.” The sign would be hurtful to the gay community. If Smith wants to make wedding websites, she must make same-sex wedding websites, too. That’s like ordering a store that makes Christmas ornaments to make Hanukkah ornaments, too, or a Muslim catering hall to serve pork chops.

Smith is suing for the right to post her sign. When she lost in the lower courts, dissenting Judge Timothy Tymkovich reflected that “we have moved from ‘live and let live’ to ‘you can’t say that.’”

The court ruled 7–2 for Phillips, arguing that Colorado had taken a mocking, dismissive attitude toward his religion.

Even so, the Masterpiece ruling was not a masterpiece of legal reasoning, which is why the court is now considering Smith’s battle.

Colorado authorities’ attitude toward the religious is still “let them eat cake.” Their approach smacks of intolerance.

Smith’s attorneys object to the coercion and “harassing litigation” that LGBTQ advocates are using to target religious believers not just in Colorado but all across the country: A pro-life photographer is sued for refusing to make promotional photos for Planned Parenthood; a family farm is ousted from a farmers market for posting Catholic beliefs about marriage on Facebook.

LGBTQ advocates have been strong-arming devout business owners and bringing a torrent of lawsuits against them. Smith’s lawyers are urging the Court to end this “toxic legal climate.”

Some lawsuits look like setups, suggests The Wall Street Journal’s William McGurn. The same day Phillips won his narrow victory in the Supreme Court, a transgender woman ordered a custom cake from Phillips’s store to celebrate transitioning from male to female. When Phillips refused, she sued him. What are the chances she went to Masterpiece Cakeshop randomly?

What she really wants “is not a cake,” McGurn wrote. “She wants to force Jack Phillips to express speech he objects to—or force him out of business if he doesn’t do it.”

Weighing in on Smith’s case, the American Civil Liberties Union asks whether architecture, photography, and other creative businesses can post signs saying, “We Do Not Serve Blacks, Gays, or Muslims.”

It’s obvious that signs like that would be abhorrent and unconstitutional. Smith’s sign does not exclude any group, only a type of product that is inconsistent with her faith.

Smith’s lawyers are urging the court to “harmonize” the rights in conflict here—Americans’ long-standing right to free speech and the LGBTQ community’s right to equal treatment. Harmonize is the right approach.

In our pluralistic society, neither side can win entirely, leaving the other side with no rights and no voice.

Judge Tymkovich said our only choice is to take a “live and let live” approach. Expect a majority of the justices to agree.

Betsy McCaughey
Follow
Betsy McCaughey, Ph.D., is a political commentator, constitutional expert, syndicated columnist, and author of several books, including “The Obama Health Law: What It Says and How to Overturn It” and “The Next Pandemic.” She is also a former lieutenant governor of New York.