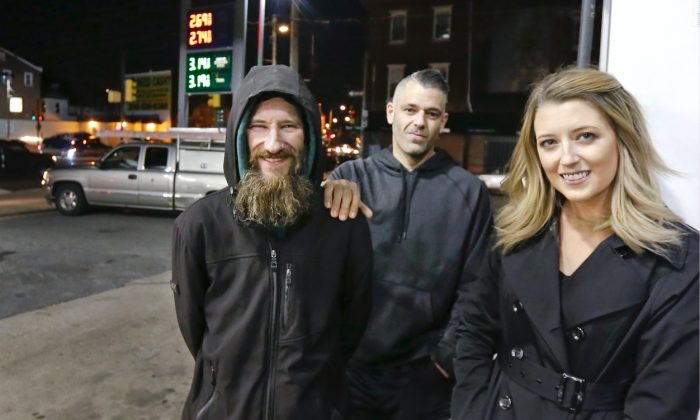 Johnny Bobbitt (L), Kate McClure (R) and McClure's boyfriend Mark D'Amico pose at a Citgo station in Philadelphia. McClure and D'Amico raised more than $400,000 for Bobbitt, a homeless man, but withheld the funds for fear he would buy drugs. But on Aug. 30 a New Jersey judge issued an order compelling them to hand over the funds. (Elizabeth Robertson/The Philadelphia Inquirer via AP)
US News

A couple who raised more than $400,000 for a homeless man that used his last $20 to fill up the gas tank of a stranded motorist in Philadelphia must now turn over what’s left of the cash.

A New Jersey judge issued the order Thursday, Aug. 30, during a hearing on a lawsuit brought by Johnny Bobbitt, the man who made headlines fame by helping Katie McClure when her car ran out of gas on the I-95 exit ramp near Philadelphia.

Bobbitt’s lawyers claimed McClure and her boyfriend, Mark D’Amico, have mismanaged a large portion of the donations raised for him on GoFundMe.

The couple denies allegations of mismanagement, saying they were reluctant to give Bobbitt such a large sum of money out of fear he would buy drugs.

The judge ordered the funds transferred into an escrow account by the end of business Friday and hire a forensic accountant to review the financial records within 10 days.

Bobbitt’s lawyers will have control of the account, but won’t be able to use the funds in it until the judge makes a follow-up determination on the management of the money.

The judge didn’t appoint a guardian to oversee the funds, something Bobbitt’s lawyers had requested, but one could be appointed later.

Bobbitt, a former Marine and first responder, spent his last $20 to help McClure buy gas after her car broke down on the I-95 exit ramp near Philadelphia.

McClure posted about it on social media and the news of Bobbitt’s selfless act quickly went viral.

The story is in the link guys. Thanks so much for even taking a quick look! Let's do something special https://t.co/MFugVz1mj2 #philly #love

Initially, McClure made an effort to stop by where Bobbitt was often spotted.

First, she repaid him for the gas, then brought him a jacket, some gloves, a hat, warm socks, and a few dollars each time she stopped by.

Through conversations, she learned that Bobbitt was originally from North Carolina, and had been an ammunition technician in the Marines.

McClure and D’Amica found Bobbitt’s old Facebook page, where he chronicled a romantic relationship to a breakup, and his training to become a paramedic as he aspired to be a flight nurse.

But bad luck and some bad decisions lead Bobbitt to get involved with drugs, leading to financial problems and a criminal record.

A friend of Bobbitt’s told The Philadelphia Inquirer that he had a “good heart” and was a talented and smart paramedic, but his life took an unfortunate turn.

McClure and D’Amico set up a GoFundMe page to collect funds to help Bobbitt get a leg-up in life.

The response was overwhelming.

The funding goal was $10,000, but within nine months the amount collected reached $402,706, an extraordinary result that received broad media coverage.

A Feud Over Funds

But the sweet story turned bitter, with Bobbitt claiming the couple was withholding his funds.

McClure said on the GoFundMe page that the money would be used to buy Bobbitt a house and truck, and the rest would be placed in two trusts—one that would let him “collect a small ‘salary’ each year” and another for his retirement.

“This is a well thought out plan that Johnny his lawyer and financial advisor came up with in order to give Johnny the means to acclimate back into a ‘normal’ life and also to protect him and ensure he has a bright future,” McClure wrote.

But instead of a house, they bought him a camper, which they parked in their New Jersey home driveway, where Bobbitt lived until June.

“This was not his choice and he didn’t have any say in the matter,” said Jacqueline Promislo, another lawyer working the case, according to CNN. “Johnny would have preferred to go back to North Carolina. That would have been a much better environment.”

According to Promislo, Bobbitt “had no access to money or food” while living in the camper and “he didn’t have any ability to take care of himself there.”

The couple also bought him a truck, which they allegedly drove until it broke down, Promislo claimed.

GoFundMe was also investigating the claim of misappropriation of the funds from the drive.

A spokesperson for GoFundMe said the crowdfunding website “is looking into the claims of misuse regarding this campaign.”

“When there is a dispute, we work with all parties involved to ensure funds go to the right place,” GoFundMe’s statement read, the Philadelphia Inquirer reported. “We will work to ensure that Johnny receives the help he deserves and that the donors’ intentions are honored.”

Meanwhile, the couple told The Philadelphia Inquirer that they did what they could to help Bobbitt, and are withholding the money until he gets a job and is off drugs.

Bobbitt, who told the newspaper that he had spent a portion of a lump sum of $25,000 the couple had once given him on drugs, is now back on the streets, panhandling.

He said he feels betrayed, and that he prefers to beg in public than ask the couple for cash.

McClure, too, said she feels betrayed, and claimed Bobbitt pawned goods he had stolen from them to feed his drug habit.

Meanwhile, D’Amico told the paper that while no trusts have been set up for Bobbitt, about $200,000 remains of the collected funds in a savings account that he controls.

He said he will give the money to Bobbitt when he is clean, because giving it to someone addicted to drugs would be like “giving him a loaded gun.”