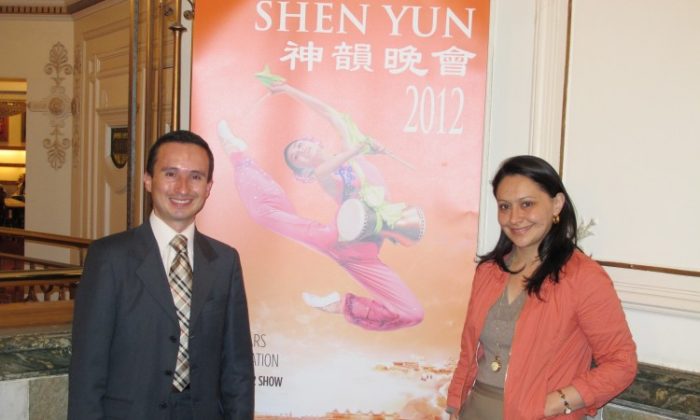 Couple Travels From Columbia to See Shen Yun in London

LONDON—”We’ve travelled all the way from South America and we really enjoyed the show,” said Andres Restrepo, who had made the trip especially to see Shen Yun Performing Arts’ final performance at the London Coliseum on Sunday, Apr. 15.

Mr. Restrepo, an Instructor for Aviation English at Copa Airlines, travelled all the way from Colombia with his wife Liz Romero after a relative recommended Shen Yun.

“We love the performance, the music, the choreography,” said Mr. Restrepo. “[It’s] really fantastic being here.”

Shen Yun Performing Arts, based in New York, seek to revive the 5,000 years of traditional Chinese culture through classical Chinese dance and music, according to the company’s website.

A signature element of Shen Yun’s performance are story-based dances, which retell ancient legends and classical tales emboding traditional Chinese values, such as benevolence, honour, propriety, wisdom, and sincerity, according to the Shen Yun website.

Some stories are contemporary, exploring courage, compassion, and divine intervention related to how people’s lives are affected by the persecution of the spiritual discipline of Falun Dafa in China today.

Mr. Restrepo said he had not heard about Falun Dafa before, but said “it was really great to see it”.

His overwhelming feeling about the performance was one of unity and harmony, he said. “I felt a sense of unity, all along the show, and I think that’s an idea I have of Chinese culture, a big ancient culture that all are working together with one common goal.”

Ms. Romero was impressed with Shen Yun’s innovative use of high-tech animated backdrops projected behind the performers. It adds another interactive dimension to the stage, moving audiences across the lands and dynasties of China to heavenly realms.

Shen Yun Performing Arts has three companies that tour the world simultaneously. This year it was the turn of the International Company to visit London. Mr. Restrepo was delighted to have seen the show and would recommend it to his friends and family back home. “If we can see it anywhere in the world we will be there!” he said.

Shen Yun Performing Arts, based in New York, has three touring companies that perform simultaneously around the world, with a mission to revive traditional Chinese culture. The Sunday matinee on April 15 at the London Coliseum marks the end of Shen Yun’s 2012 European Tour.