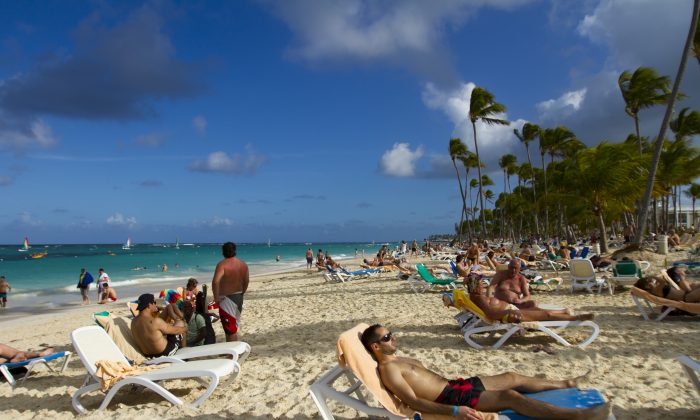 A Canadian couple picked up more than they bargained for after vacationing in the Dominican Republic.

Katie Stephens, 22, and Eddie Zytner, 25 noticed that their feet had become itchy after strolling on the beaches of the IFA Villas Bavaro Resort in Punta Cana.

“For a lot of our trip, we found that we were scratching our feet quite a bit,” Zytner told CTVNews.ca on Friday, Jan. 26. “Sand fleas we had heard about so we kind of assumed it was that at first,” he said.

But after they returned home to Ontario, Canada, Zytner noticed his feet had become highly swollen and small bumps had formed on his toes. Shortly after, Stephens had similar symptoms.

They visited two doctors who didn’t know what had caused the symptoms, but a third doctor had seen the condition before from a patient who had visited Thailand.

He told them they had contracted larva migrans, or hookworms, which are parasites that can penetrate the skin and live in the small intestine, according to the CDC.

They believe they contracted the worms while walking barefoot on the beach.

“I have dozens of worms in my feet, and so does Katie,” Zytner told the Windsor Star. “It’s kind of sickening to think about.”

Stephens added: “It’s pretty gross. It’s something living in your body that’s not supposed to be there.”

A drug called ivermectin can be used, Stephens wrote in a Facebook post, but Health Canada denied the couple’s request to take it, saying their case wasn’t severe enough.

“At that point, that’s when we freaked out a little,” Stephens told CTVNews.ca.

That’s when Stephens’s mother offered to drive into Detroit and buy the medication from a pharmacy there.

After taking it for two days, there was marked improvement, although they still need to use crutches to walk.

“They [my feet] feel better,” Zytner told CTVNews.ca. “They looked a little bit better yesterday. We’re getting our bandages changed again … so we’ll have another chance to look at them and see how it’s progressing.”

The couple said they are sharing their story to raise awareness of the parasites for travelers and doctors.

“We’d never heard of having to wear shoes on a beach. We never thought this could happen,” Zytner said to the Windsor Star.

“We want to make it known to more doctors what it is, what to look for and stuff because it took us a few trips to the hospital to find out what it was,” he told CTVNews.ca.