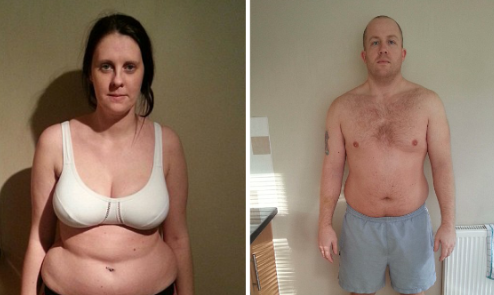 Couple Has 16 Weeks Before Wedding to Get Fit, and The Results Are Stunning

They had just four months before their wedding, but they wanted to get as fit as possible to look their best on the big day.

Paul and Abi Maddern hired a personal trainer with the mandate of losing some serious weight and also adding some muscle so that they’d feel good as they wed.

Abi, 29, faced the biggest challenge because she’d put on weight while recovering from back surgery to correct scoliosis, or curvature of the spine.

“I was off work for 12 weeks after the operation and as I’m a hairdresser I’m usually on my feet all day. It was a bit of a shock. I put a fair bit of weight and I didn’t want to look like that for the wedding day, so we found a personal trainer,” she told the Daily Mail.

By overhauling her diet by cutting out sugar, junk food, and alcohol, and adding lots of green vegetables and lean meat–and with just a little exercise every day–she was able to go from 154 pounds and 31 percent body fat to 135 pounds and just under 12 percent body fat.

Paul, who had also put on weight after starting a relationship with Abi, was by his wife’s side and had mostly the same diet as her.

He went from about 236 pounds to 207 pounds, gaining 14 pounds of muscle in the process.

“We wanted to improve our self-confidence and do our own rehab. I wouldn’t say we were let down, but Abi wasn’t offered much in the way of physiotherapy. She wanted to strengthen her core after the operation,” Paul said.

Abi said she’s pleased with the results. “I feel great now, the best I’ve ever felt in my life. I don’t think I could’ve done it if both Paul and I weren’t in it together. I would’ve still tried my best, but it would’ve been a lot harder.”