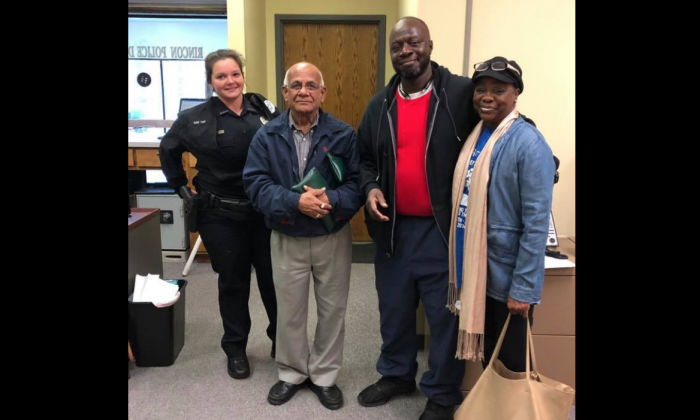 A couple found a bag full of money and immediately turned it in to police in Rincon, Ga., on Nov. 16, 2018. (Rincon Police Department)
US News

Couple Finds $25,000 and Immediately Gives It to Police

A couple recently proved the existence of good Samaritans and inspired the residents of their small town at the same time.

Jeff and Michelle Green from Georgia came across a deposit bag with almost $25,000 inside on Nov. 16. Knowing that someone musts be desperately looking for the money, they turned it over to police so it would find its way back to its rightful owner.

Sure enough, police had received a call that same day from local business owner Gautambhai Patel, who said he had lost that same amount of money.

“Today, local business owner Gautambhai Patel reported having lost a deposit bag with nearly $25,000! Our office began investigating but hoped that whoever would find the bag would do the right thing and turn it in. Local residents Jeff and Mechelle Green are those amazing people!”

How about some GOOD news?!?Today, local business owner Gautambhai Patel reported having lost a deposit bag with nearly…

“They recovered the bag and made sure it was returned to the rightful owner. We always encourage citizens to do the right thing both morally and legally! Thank you to the Green’s!” stated the post.

The post received more than 120 comments from Facebook users who were very glad to hear the happy news.

“Way to go Mr. & Mrs. Green! You will be blessed one day!!” wrote Melinda Roberson Jarrell under the post.

“Mr G and family are very nice people [and] will give you the shirt off his back,” wrote Lucille Griffin Green.

What Happens When People Find Valuables

When people find cash lying around, they might wonder what to do with it. These questions have important ethical and legal implications, according to the Criminal Defense Lawyer online information site.

“Even though cash is not marked with the owner’s identity—like a check or savings bond—it is a piece of property that originally belonged to someone other than the finder. So technically, cash you find is not automatically yours,” states the website.

Many places have ordinances or laws in place that require a person to turn in money over a certain amount that they find to the police. The legal value may be an amount such as over $100, for example.

If no one comes forward to claim the money after a designated amount of time, it might be returned to the finder. However, other places might have different laws on this issue or even no laws at all.

“In the U.S., traditional ethical guidelines about finding money are quite similar—you should try to find the owner and only keep the money if you made a reasonable effort and couldn’t locate the owner,” reports the website.

If people make no effort to return any money they find or even go spend it, they could be charged with a crime. They should first check their local laws, call an attorney, or contact the police.

In the case of a wallet or other personal item found, people can also look inside for an address or something that might identify who lost it. They can even get creative and enlist the media.

Wedding rings lost and found! A local woman found these rings in Raleigh Walmart parking lot & she wants to get them back to the rightful owner. Do you know anyone who’s lost their rings? pic.twitter.com/KehTITX9AR

In March, Esther Daniel picked up a pair of diamond-studded rings in a Walmart parking lot in Raleigh, North Carolina. She tried posting them on social media, but no one claimed them. The she called the local news media.

“When I was a little girl my mama taught me on honesty and just this week we were talking with my son about integrity,” Daniel said to ABC11. “That integrity is doing the right thing when no one is watching. That’s the only reason why I persistently did the right thing and I’m hoping that it gets to the right person.”

Fortunately, the owner of the lost engagement and wedding ring saw the news segment and was reunited with her lost property.

Walmart even rewarded Daniel with a $500 gift card for choosing to do the right thing.