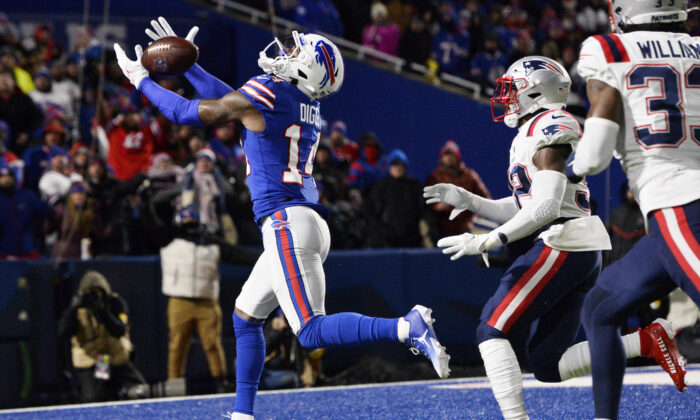 Michael Nabb, 34, and Amber Nabb, 37, attended the Jan. 15 game against the New England Patriots in Highmark Stadium. They were later questioned by team officials and law enforcement during the third quarter of the game, said Erie County District Attorney John Flynn on Wednesday in a news conference.

Flynn said the Nabbs’ vaccine cards were falsified. They were charged with criminal possession of a forged instrument, a felony.

In 2021, the Buffalo Bills’ ownership mandated that all fans who attend their home games show proof they’ve been vaccinated against COVID-19, the illness caused by the CCP (Chinese Communist Party) virus.

Flynn said the couple procured blank Centers for Disease Control and Prevention (CDC) vaccine cards and filled in their names and dates of birth. They also put in a Pfizer lot number and said they were vaccinated at a CVS pharmacy location.

The couple was being investigated by law enforcement officials before they attended the game, said Flynn. They had previously posted on social media that they were able to get into events using the falsified vaccination cards, said Flynn.

Flynn said the Bills asked for the couple to be prosecuted. Criminal possession of a forged instrument in the second degree carries a maximum penalty of seven years in prison, said Flynn.

The district attorney explained during the news conference that he wasn’t looking to “jam them up” in terms of a legal outcome. “But I can’t just let them go. I can’t just say, ‘You know what? I’m going to disregard this law.'”

The couple was arraigned on Tuesday evening and were later released on their own recognizance. They are scheduled to appear back in court on Feb. 22, officials said.

“I readily admit this is not the crime of the century,” Flynn also said, reported the Daily Wire. “I hate to be the guy that says ‘I need to send a message.’ I don’t like being that guy, but you can’t do this. There’s a law, we got laws on the books.”

“It’s a slap in the face to the 70,000 others” who attended the game, the district attorney added. He noted that the Nabbs likely won’t serve any prison time over the charge.

“Individuals who misrepresent their vaccination history, not only jeopardize their own health, but the health of all those they come into contact with. This legislation ensures that as New York opens up and many businesses choose to rely on checking vaccination status, the falsification of vaccination records will not be tolerated,” said the governor’s office at the time.