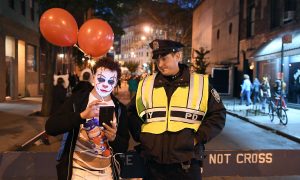 An apparent murder-suicide in Hermitage, Tennessee, left a 6-year-old boy and his grandparents dead, police said.

Then, police said, he turned the gun on himself and took his own life.

Ty’s 4-year-old sister witnessed the shooting and was not harmed. She ran to the neighbors for help, according to police.

Update on Sat’s apparent double murder-suicide case on Dockside Dr: Terry Majors, 64, is believed to have fatally shot his wife, Leigh Shea-Majors, 61, & his grandson, Ty Dodson, 6, before killing himself. His 4-yr-old granddaughter was uninjured & ran to a neighbor for help.

An uncle, Chase Dodson, told the station that he believes Ty told the girl to run away, CBS17 reported.

The three were found dead in Hermitage, which is located some 20 minutes from Nashville, at around 7 p.m. local time, Fox 17 reported.

“It’s so hard… when those kids come into your classroom, they become your own and I can’t describe how much I love Ty,” said Tabitha Collins, the child’s former preschool teacher at Allen County Primary Center, according to the CBS17 report.

She said that other classmates called him “Ty the science guy” and he had dreams of becoming a police officer.

“He was constantly smiling and wanting to take care of everyone. He has a little sister that’s in preschool this year, who he walks in and just makes sure that she would get to school and in the classroom okay,” Collins added. “Very smart, very curious. We always called him ‘Ty the science guy’ because he loved the science center.”

Meanwhile, a user on Twitter, Melody Butler, wrote to Metro Nashville Police: “This was my stepfather growing up, he raised me. I can’t believe this.”

According to the American Foundation for Suicide Prevention, suicide is the 10th leading cause of death in the United States and in 2017, 47,173 Americans died by suicide, while 1.3 million people attempted suicide.

The Centers for Disease Control and Prevention released a report called “Vital Signs: Trends in State Suicide Rates” on June 8, 2018, revealing that suicide rates have increased by 30 percent since 1999. However, the report points out that there were a variety of factors other than mental health conditions that lead to suicide.

“Suicide rates increased significantly across most states during 1999-2016. Various circumstances contributed to suicides among persons with and without known mental health conditions,” the report stated.