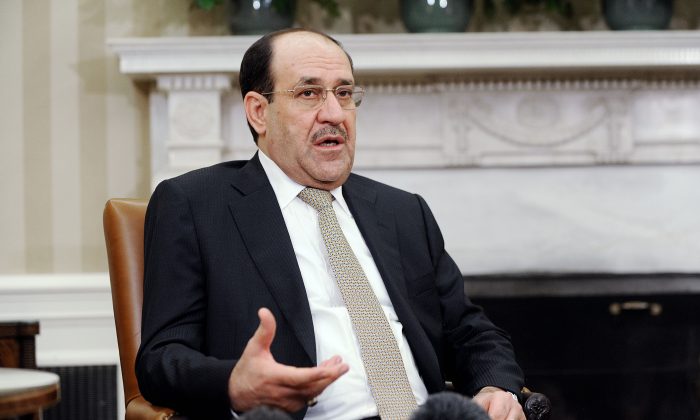 Iraqi Prime Minister Nouri Al-Maliki speaks during a meeting with U.S. President Barack Obama in the Oval Office at the White House November 1, 2013 in Washington, DC. Maliki is at the center of a political crisis in Iraq and rumors of a coup in Baghdad aimed at keeping him in power. (Olivier Douliery-Pool/Getty Images)
Middle East

On Sunday night, journalists began tweeting that Iraq Prime Minister Nouri al-Maliki has launched a coup in Baghdad. The reports of a heavy military presence or a coup follow Maliki’s defiant refusal to accept that he has failed to assemble a governing coalition.

Mina Al-Oraibi, Iraqi journalist based in London, at 8:10 p.m. ET tweeted, “Maliki either has backing of some political blocs and external forces, or he is taking a huge gamble which he will lose.” And then a few minutes later tweeted, “Street fighting is a real concern in Baghdad tonight.”

Iraq was thrown into a political crisis on Sunday night, as Maliki failed to assemble a governing majority in Parliament by the required midnight deadline.

In a speech on Sunday, Maliki asserted that he is remaining in the office of the Prime minister and demanded that Iraq’s president, Fuad Masum, give his party a mandate to form a new government.

The Shiite Maliki has a reputation as a polarizing figure who has excluded the minority Sunnis from the Iraqi government. Within Iraq there have been calls from Sunnis, Kurds, and other Shiite’s that Maliki step down, according to Reuters.

Reuters has also reported that Iran has called for Maliki to step down in order to make way for a less polarizing figure who could unite the country against the threat of the Islamic State, which has seized large chunks of Iraqi territory, including its second-largest city.

The United States has not explicitly called for Maliki to step down, but statements by President Obama and State Department spokesmen have called for Iraqi leadership that can build a national consensus.