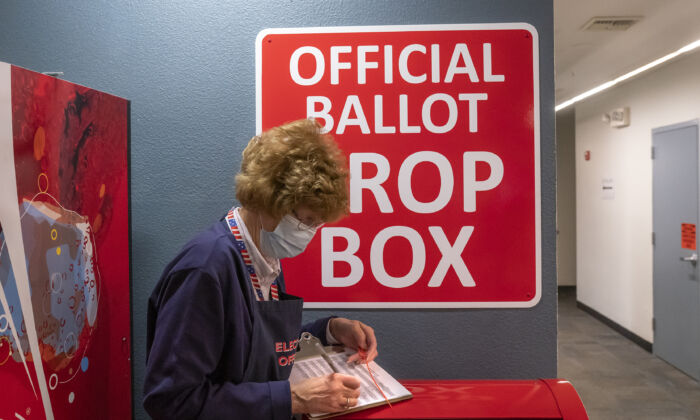 An election worker makes a record of a ballot pickup on Nov. 3, 2020 in Vancouver, Washington. (Nathan Howard/Getty Images)
US News

A group of county clerks and commissioners is suing Colorado’s Secretary of State Jena Griswold, a Democrat, for her alleged role in the deleting and writing-over of electronic election records.

Filed in Denver County District Court in November 2021, the suit has survived one motion to dismiss by Griswold and is facing another.

The plaintiffs’ second amended complaint, filed on Jan. 10, 2022, asks the court to declare that Griswold’s office “deleted or destroyed electronic election records from the 2020 election.”

Election officials are required by Colorado law to preserve election records for 25 months.

The local clerks contend that her alleged actions injured them in the performance of their statutory duties to ensure honest and fair elections.

Griswold’s office did not respond to a request for comment, but its second motion to dismiss asserts that computer log files do not meet the legal definition of “election records.”

The tech website howtogeek.com says log files show all events and activities associated with the computer system or application that created them.

Log files record when any changes are made in the system and by whom.

Elbert County clerk Dallas Schroeder, a plaintiff in the case, has acknowledged that in July 2021 he made a forensic image of everything on his county’s election server because, according to court pleadings, Schroeder had a reasonable belief that a scheduled update of the system, which was to be conducted in August by employees of the Secretary of State and the system’s vendor, would erase records of the November 2020 election stored on the server.

Schroeder and other local officials are asking the court to allow independent forensic audits to determine the extent of deleted or destroyed records, and whether such records can be reconstructed.

The original complaint states the local election officials, to the extent possible, are seeking to determine “whether the Colorado voting systems accurately recorded the votes of the people of Colorado in the 2020 election.”

Plaintiffs are also seeking an injunction to prevent Griswold from deleting or destroying election records in the future.

In October 2021, the Colorado Secretary of State’s Office issued a new rule that bars local election officials from contracting with an independent, non-employee, cybersecurity expert to forensically audit or otherwise examine local election systems or equipment.

Exhibit 8 of the plaintiffs’ brief contains a tweet from Griswold, in which she says of her action, “My office just issued rules prohibiting sham election audits in the State of Colorado. We will not risk the state’s election security nor perpetuate The Big Lie. Fraudits have no place in Colorado.”

Holly Kasun, a spokesperson for attorney John Case, the plaintiffs’ lawyer, told The Epoch Times that Griswold’s rule, “made sure only the state can audit the state.”

Plaintiffs are asking the court to declare the rule exceeds Griswold’s statutory authority. They argue it is an arbitrary, capricious, unwarranted, and abusive infringement on the prerogatives of local officials in the carrying out of their sworn duty.

Oral arguments on Griswold’s second motion to dismiss are scheduled for March 11.