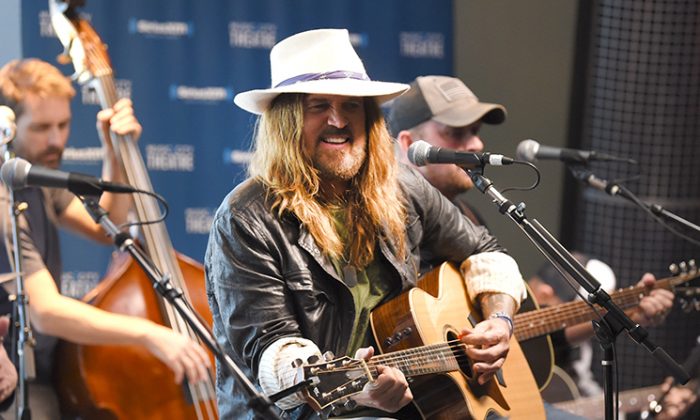 Country singer Billy Ray Cyrus is using his fame to call attention to something more serious than pick-up trucks and break-ups.

Cyrus is speaking out about the plight of Native Americans in North Dakota who have complained they are being disenfranchised by the state’s new, more stringent voter ID law.

The new law requires every voter to provide some form of ID showing a residential street address.

Had a great time at #PartyAtThePolls today! Make sure to vote and let your voices be heard! #GoddessOfDemocracy 📷: Allison

Cyrus said he was stunned when he first heard what was happening.

“I don’t know that I’d ever had a jaw-dropping moment but I sat there and after it was over, my jaw was still hanging open,” Cyrus told ABC News.

On Oct. 9, the Supreme Court decided to uphold North Dakota’s new voter ID law, giving the state’s Native Americans just three weeks to get new IDs so they can vote.

Fortune quoted Supreme Court Justice Ruth Bader Ginsburg as saying that the law could disenfranchise some 70,000 voters. Many of these people already voted in the state’s primary election with their old ID.

No Street Names, No Street Addresses

Courtney Yellow Fat, a tribal council member for the Standing Rock Sioux Tribe, has spent most of his life on the reservation. When he wanted to renew his driver’s license, he decided to invent a street address.

Yellow Fat hopes his fellow reservation dwellers will make the effort to get updated IDs.

“I believe and I hope it’s going to have the opposite effect of suppression because the people here are so used to fighting uphill battles against the U.S. government,” he told ABC.

“Why they are restricting us to vote, it’s unconstitutional because we have a right to vote, despite where we live. We’re all human, you know, and we all want the right people in these offices, so we need to vote the right people in,” Left Hand told ABC.

Today, we will make music and voting history. See you there Nashville! #GoddessOfDemocracy Party At The Polls – Nashville📷: Frederick Breedon/Getty Images

A Need to Speak Out

Billy Ray Cyrus heard so many similar stories that he decided he had to speak out.

“I think in this given moment, it’s just a great chance for the originators of America, the Native Americans, to stand up and say ‘You know what, this democracy thing, it’s worth fighting for still. Let’s just go get our cards and let’s go vote, and keep democracy alive. Our country is counting on us’.”

Power to the people. Save our democracy. Tomorrow is the deadline to register to #vote. This is your chance to make your voice heard. #GoddessofDemocracy 🎥:@dkupishNash / Audio:@rtrosley pic.twitter.com/zarxSdtNwn

“Everybody can stand up and argue, but it’s too late for that right now,” Cyrus went on. “Like, okay—it’s showtime right now. It’s time. It’s time.”

Cyrus told ABC that he hopes President Donald Trump can do something to help the Native Americans.

“There’s got to be something. You know, the president, he’s the king of fixing things. He says he can fix anything. Well, he can fix this. This’ll be an easy one,” Cyrus said.

Let’s fix this ND Secretary of State Al Jaeger and @realdonaldtrump @flotus. How can I help you help Native Americans retain their right to vote in this upcoming election? @abcnetwork @gma @rickklein @DavidMuir https://t.co/XReHkR0yQY

The Tribes Are Trying

OJ Semans, executive director of the Native American voting rights group Four Directions, told ABC that the tribes realize the importance of the issue and are taking steps to help everyone exercise their right to vote.

“We’re working with the tribes, getting tribal officials to be at polling places or setting up an office near the polling places so people can get a tribal letterhead, get their IDs and go vote,” Semans said.

“They are going to create their own addresses to identify residences on the reservation with physical addresses.”