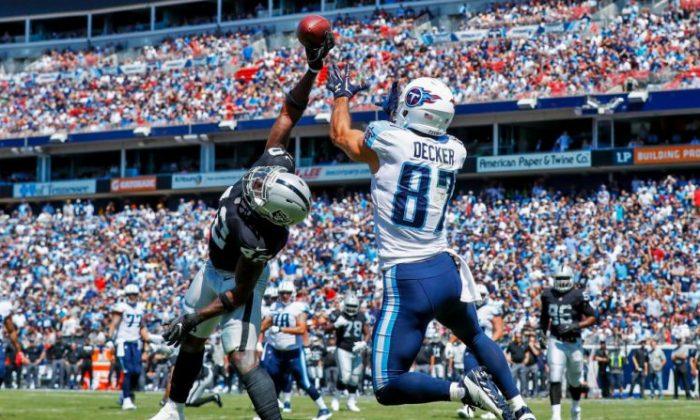 Safety Karl Joseph #42 of the Oakland Raiders deflects a pass intended for wide receiver Eric Decker #87 of the Tennessee Titans in the first half at Nissan Stadium In Nashville, Tennessee, on Sept. 10, 2017. (Wesley Hitt/Getty Images)
US News

A star country singer and wife to a Tennessee Titans football player says her husband was tricked into protesting the National Anthem on Sunday.

Country star Jessie James Decker said that husband Eric Decker, a wide receiver for the Titans, was not told that the National Anthem was being performed on the field while he was in the locker room.

“My husband was not made aware it was time to go out for the game,” Jessie James Decker told TMZ. “Unfortunately a decision was made for him without him knowing.”

Decker also posted a passionate message about her love for the National Anthem, to which her husband commented, “Preach baby.”

“One of my favorite things to do is sing the national anthem. I think about my dad, my uncles, my cousins, both grandfathers who fought in the Vietnam war. I think about how my grandfather paw paw Tim would ask me to sing this song for him every time I saw him and how he would make me turn the other way to sing it so he could just weep and cry as hard as he wanted because it meant so much to him,” the country star wrote.

“When I sing this song I think about them. This song is about them. It’s not about me. That’s what I think about every time I sing it. I love our country so much. And we should all love and respect each other because this is the greatest country in the world. I see the love. I see the unity in all walks of life on a daily basis and It makes me so proud to be an American. So in the words of Forrest Gump. That’s all I have to say about that.”

The Titans released a statement after the game saying that the team decided to stay off the field during the National Anthem because they “wanted to be unified in our actions today.”

“The players jointly decided this was the best course of action,” the team’s statement said. “Our commitment to the military and our community is resolute and the absence of our team for the national anthem shouldn’t be misconstrued as unpatriotic.”

The Seahawks also remained in the locker room during the National Anthem. The team later issued a statement saying that the team “will not stand for the injustice that has plagued the people of color in this country.”

Jessie James Decker also posted a video of herself singing the National Anthem at a Sept. 10 game in Nashville between the Titans and the Oakland Raiders.