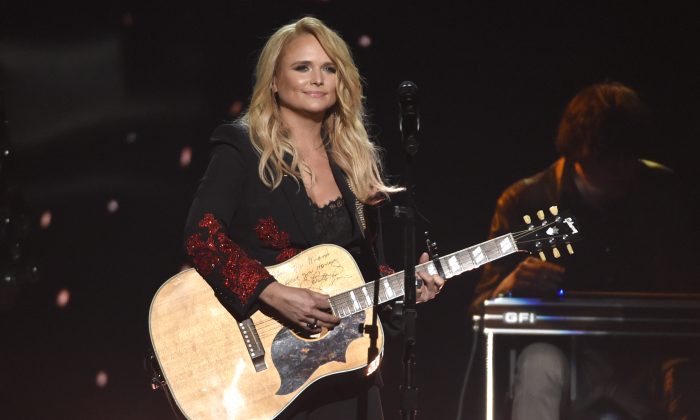 A representative for the singer confirmed the marriage after Lambert posted photos on social media on Feb. 16 showing her in a white lace gown with her new husband, Brendan Mcloughlin.

In honor of Valentine’s Day I wanted to share some news. I met the love of my life. And we got hitched! My heart is full. Thank you Brendan Mcloughlin for loving me for…. me. ❤️#theone pic.twitter.com/EgcerqUqEd

She wrote that in honor of Valentine’s Day, she wanted to share that she “met the love of my life. And we got hitched!

“My heart is full. Thank you Brendan Mcloughlin for loving me for … me,” she continued, adding on a love heart emoticon and the hashtag “theone.”

It’s unclear when the marriage occurred.

On Feb. 16, the newlyweds were spotted out and about in New York City’s SoHo district, holding hands with their wedding bands on full display.

Mcloughlin is a police officer with the New York Police Department’s Midtown South Precinct. He has featured a few times now on the precinct’s Twitter page.

So… @mirandalambert‘s husband Brendan Mcloughlin is a cop from NYC.

This is the second marriage for Lambert. She was previously married to Blake Shelton but the couple divorced in 2015.

After the divorce, Lambert had dated the singers Anderson East and Evan Felker.

A Timeline of Miranda Lambert and Anderson East’s Relationship and Reported Breakup https://t.co/YOUc7INd2B

“Love is a hard road sometimes and it’s been a roller-coaster ride for me, but I’m definitely thankful for all the ups and downs because I’ve had some really good songs come out of it,” Lambert told The Tennessean at the time. “You’ve got to take the bad parts and put them on paper and then move on to the happy parts.”

The two-time Grammy winner was previously married to country star Blake Shelton, but she hadn’t spoken publicly about her relationship with Mcloughlin before Saturday. The Texas-born singer who is also a member of the group Pistol Annies has had hits with songs like “The House That Built Me,” ”White Liar,” ”Mama’s Broken Heart,” and “Gunpowder and Lead.”