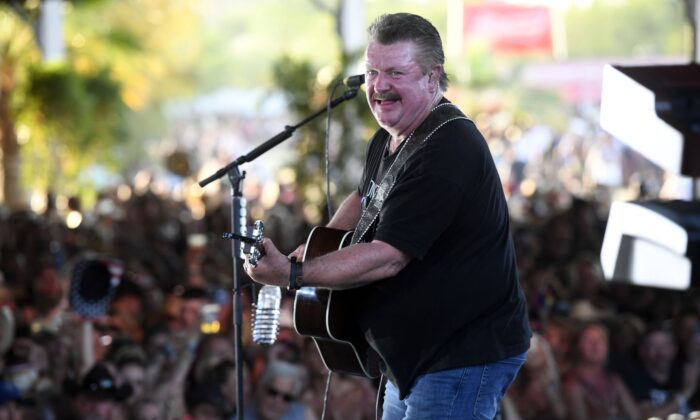 Grammy Award-winning country singer Joe Diffie died at age 61 after testing positive for COVID-19, according to a representative on Sunday, prompting a number of singers to mourn his ddeath

“Joe Diffie passed away today, Sunday, March 29 from complications of coronavirus (COVID-19). His family requests privacy at this time,” reads a post on his Facebook page.

Diffie said he tested positive for the CCP virus on Friday, March 27.

“I am under the care of medical professionals and currently receiving treatment,” Diffie said in a statement at the time. “My family and I are asking for privacy at this time.” Diffie’s statement also urged fans to stop the spread of the virus. “We want to remind the public and all my fans to be vigilant, cautious and careful during this pandemic.”

A number of singers offered their tributes, including Jason Aldean.

“Man what a week Kenny Rogers and now Joe Diffie,” Aldean wrote on Twitter. “This guy was an amazing singer and an even greater person. Such a sad week for the country music world.”

“We had a lot of great times together, both onstage and offstage,” singer Travis Tritt wrote. “This is one of my favorite photos of Joe Diffie and me onstage together. This photo hangs in my office to this day. #RIPjoediffie I will never forget you!”

Man what a week Kenny Rogers and now @JoeDiffieOnline. This guy was an amazing singer and an even greater person. Such a sad week for the country music world. Joe was always so much fun to be around and I will never forget our Panama City show with @tylerfarr and @tracy_lawrence. pic.twitter.com/nUvqsDzsBj

“I’m devastated by the loss of my friend Joe Diffie,” Brad Paisley said on Twitter. “I can’t find adequate words. But the records he made, that voice, the twinkle in his eye, and our memories cannot be taken away by this disease.”

According to Rolling Stone, he had “five Number One singles in the first half of the Nineties” and “began with his debut release, the deeply moving ‘Home,’ followed by ‘If the Devil Danced (In Empty Pockets),’ ‘Third Rock From the Sun,’ ‘Pickup Man,’ and ‘Bigger Than the Beatles.'”

For most people, the virus causes mild or moderate symptoms, including fever and a cough that clear up in two to three weeks. However, for some, including older adults and those with preexisting health issues, it can cause pneumonia or even death.

Diffie was reportedly planning to release his first new album in seven years, “I Got This.”

Other details about his death, including where he was hospitalized, are not clear. Diffie is the first country music star to go public with a coronavirus diagnosis.