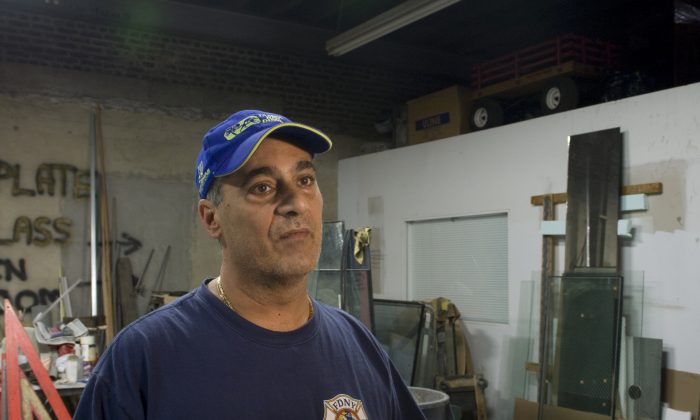 Buddy Civitano, owner of BC Glass, inside his Red Hook business. Both his business and home in Staten Island were untouched by the flooding. (Genevieve Belmaker/Epoch Times)
New York

NEW YORK—When the water from Sandy rushed down Coffey Street in Red Hook, Buddy Civitano’s business was spared from flooding by a simple twist of fate.

Civitano’s window and mirror installation business BC Glass sits at street level with a large sliding bay door. The door had been damaged and replaced just prior to Sandy.

The new door had a solid rubber seal that prevented Sandy’s floodwater from getting inside. His merchandise, most of which was vertically stacked on dollies, was untouched by what little water did seep in.

“The worst thing was our wheels [on the dollies] froze,” said Civitano, who has owned and operated BC Glass since 1980.

At his home in Staten Island’s South Beach, Civitano was also miraculously spared. There, the storm pounded on his door again, but didn’t punch through.

Despite seeing his neighbors’ cars floating down the street, he never lost power, and his home was left “bone dry.”

Not until Sandy did he realize how close he lived to the water.

Civitano said to this day he can’t understand how he made it through such a horrific storm practically unscathed.

“I must have somebody watching out for me.”