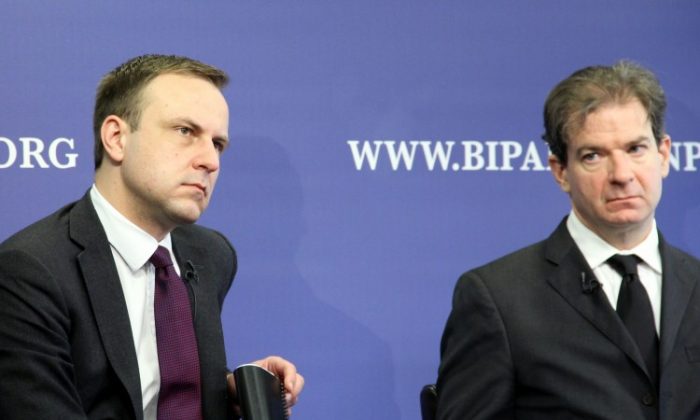 Dr. Peter Neumann and author Peter Bergen speak at the launch of the report 'Countering online radicalization in America' at the Bipartisan Policy Center in Washington D.C., Dec 4. Neumann believes engagement, rather than censorship, is a more effective deterrent to online terrorist activity. (Shar Adams/The Epoch Times)
US

WASHINGTON—Wade Michael Page, the gunman who killed six worshipers at a Wisconsin Sikh Temple last August, did not become a neo-Nazi through the Internet, but there is no doubt that the hours he spent connecting with like-minded people on white supremacist websites fueled his prejudices.

The rock star with racist tattoos posted more than 250 comments on one website and urged others to “stop hiding behind their computers” and take action.

The case was highlighted in a report titled, “Countering Online Radicalization in America,” commissioned and launched by the Bipartisan Policy Center think tank in Washington, D.C., Dec. 4.

Radicalization is defined in the report as “the process whereby groups or individuals become political extremists.”

According to report author Dr. Peter Neumann, terrorists and extremists have embraced the Internet with vigor.

“There is a lot of recruitment and radicalization happening online,” Neumann said at the launch.

The Obama administration needs to develop and implement a comprehensive strategy to counteract online terrorist activity, said Neumann, but he warned against putting restrictions on the Net.

The inclination may be to shut down radical websites, filter content, and control what the public can access; however, that approach is not only ineffective but also counterproductive, Neumann said.

“Censoring the Internet is not the quick fix, not the silver bullet that some people imagine it to be,” he added.

Neumann, professor of Security Studies at Kings College London, believes that the most effective way to counter online radicalization is through more engagement, not less—and that involves educating people and countering “bad ideas with good ideas.”

While some sites are removed by service providers, and should be, online activity can also offer an insight into what extremists and terrorists are thinking.

Websites can provide valuable intelligence about who is talking to whom, what ideas are being discussed, and which actions are moot. In that way, interventions could happen earlier and violence could be prevented, according to Neumann.

“It’s about learning as much as possible about those who would do us harm, but doing so within a framework of laws and oversight,” he said.

The report referred to the late U.S.-born Muslim cleric, Anwar al-Awlaki, who used emails, blogs, chat rooms, and an online magazine called Inspire to motivate and direct Americans to attack their own country.

“[Al-Awlaki] was involved in a lengthy exchange of emails with Major Nidal Hasan, who killed 13 people at Fort Hood in November 2009, the most devastating terrorist attack on U.S. soil after the September 11 attacks,” the report states.

Peter Bergen, CNN journalist and author of the best-selling book, “Manhunt,” about Osama Bin Laden’s capture, was one of the panelists at the D.C. event. Bergen said that it is one thing to “crowd out bad ideas with good,” but it is another to do that successfully.

Some terrorist websites, such as al-Awlaki’s, are very professional, according to Bergen. “Right now, the devil has the best tunes.”

Also a director at the New America Foundation (NAF), Bergen said that he worked with companies like Google and Facebook to help moderate how Muslim communities and chaplains in America access the Internet, and to help them understand how it works in order to counteract extremism.

Presently they only have a “rudimentary understanding,” he said.

Panelist Will McCants, from the Center for Naval Analyses, questioned the focus by intelligence agencies on Muslim communities.

Radicalization of Muslims in America is “actually quite tiny,” McCants said, suggesting that more effort be directed to preventing young Americans from being drawn into white supremacists and anti-government groups.

“Pushing back online needs to be done with a view towards making this a much more cross-cutting issue,” he said.

Bergen quoted figures that may shock some Americans. The NAF has kept a database of every terrorist attack on America since 9/11, and the number of cases involving right-wing supremacists in America were nearly three times the number of those involving jihadists.

According to Neumann, fear of government in America is particularly concerning.

“It is all about government trying to take over, selling out the America to the UN—none of that is based on anything really, but it drives some of these movements,” he told The Epoch Times after the event.

Counteracting rumors and false information is important on one level, but creating a better environment for good ideas to be heard is equally important. For that, Neumann said that government must encourage the broader community, the private sector, nongovernmental organizations, and education facilities to be involved.

In America, “It is a touchy subject to have the government message,” he said. “It has to facilitate other people to do this, and that is what we would like to see more of.”