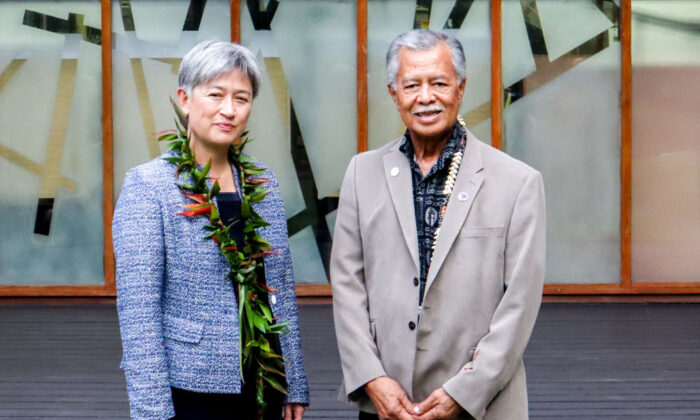 Minister says Australia will source 82 percent of its energy needs from renewable sources by 2030
By Daniel Y. Teng

Australian Foreign Minister Penny Wong has spruiked a “new era” of engagement with the Pacific in a speech to the Pacific Islands Forum in Fiji.

Wong, fresh from a trip to Tokyo for the Quadrilateral Security Dialogue, is visiting the South Pacific amid Beijing’s overt push for influence in the region.

The foreign minister said that the newly elected Albanese government would “listen” to the climate change concerns of Australia’s Pacific neighbours.

“We will listen. We will hear you—your ideas for how we can face our shared challenges and achieve our shared aspirations together,” she told attendees on May 26.

Wong said the previous government had “neglected its responsibility to act on climate change.”

“Ignoring the calls of our Pacific family to act. Disrespecting Pacific nations in their struggle to adapt to what is an existential threat,” she said.

“Whether it manifests in rising sea levels in Pacific Island countries, or in disastrous bushfires and catastrophic flooding back at home in Australia, we can see that climate change is happening across the Pacific family. I want to assure you that we have heard you.”

Wong said the Albanese government had been elected on a platform to increase the emissions reduction target of the country from 26-28 percent to 43 percent by 2030—and to reach net-zero by 2050.

The centre-left Labor government will also enshrine this commitment into law and make a formal submission to the United Nations.

“Our plan will see the proportion of renewables in Australia’s National Energy Market increase to 82 percent by 2030,” she said.

As of 2021, Australia’s national energy market sources 64.67 percent (pdf) of its electricity from coal-fired generation.

The Labor government also pledged a new Australia-Pacific Climate Infrastructure Partnership to support energy projects in the Pacific, and the establishment of an “ambassador for climate change.” It is unclear how the climate partnership will sit alongside existing funding initiatives and programs such as the Australia Pacific Climate Partnership and the Australian Infrastructure Financing Facility for the Pacific.

Wong’s pitch comes as Chinese Foreign Minister Wang Yi tours the Pacific in a bid to shore up relations with Beijing.

The Chinese Communist Party is proposing a South Pacific-wide security and data bloc to encompass 10 different Pacific nations. Beijing is proposing a China-Pacific Islands Free Trade Area, and a push for more cooperation in the “fields of traditional and non-traditional security,” including a pledge to work on data networks, cyber security, and smart customs systems.

David Panuelo, president of the Federated States of Micronesia, has written to 21 Pacific leaders arguing against the regional pact over fears it could spark a “Cold War” between Beijing and democratic nations.

“Chinese control over our communications infrastructure, our ocean territory and the resources within them, and our security space, aside from impacts on our sovereignty, is that it increases the chances of China getting into conflict with Australia, Japan, the United States and New Zealand,” he said in the letter obtained by Reuters.

The high-level tours of the Pacific also come amid the backdrop of the impending Beijing-Solomon Islands security deal that could pave the way for Chinese troops, weapons, and naval ships to be stationed in the region.

Eric Louw, retired professor of political communication and an expert in affirmative action, has warned democratic leaders against using aid to win the influence battle against Beijing.

“An Asia Development Bank report said the Solomons’ government is so weak that donors were warned not to pour too much aid into it because of the limited ability of the country to absorb it—too much aid would simply overwhelm what limited administrative capacity it had and simply fuel corruption and waste,” he wrote in The Epoch Times.

“Back during the Cold War days, corrupt politicians in weak, underdeveloped countries from the Pacific to Africa and Latin America to Asia got rich playing the two sides off against each other,” he said. “Perhaps [Prime Minister Manasseh] Sogavare thinks the good times are back and that the ‘new Cold War’ means he can simultaneously get his snout into the troughs of Beijing, Canberra, and Washington.”