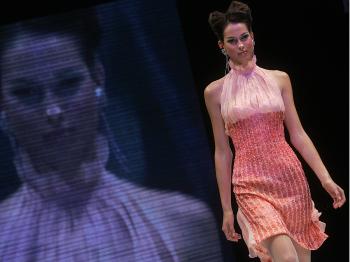 NOT AUTHENTIC: In Cergy, France authorities found counterfeit items while dismantling a Chinese criminal organization in Paris. Imported from China, then assembled or manufactured in France, the products were sold at 10 percent off the regular retail pric (Jean Ayissi/AFP/Getty Images)
Business

By Many Ngom
biggersmaller
Print
Do these well-known brands sound familiar: Paradi, Fuma, Penesamig, Daiads, Lu Vivi, or Ball stars of Convesre or Nire? No? They most likely do!

The words may not mean anything, but to those who are familiar with the likes of Prada, Puma, Panasonic, Adidas and Louis Vuitton, the names start to become more recognizable.

By imitating the logos of these famous brands, counterfeiters can sell thousands of products that give buyers the feeling of belonging to that oh-so desirable elite social class.

But why do people have this obsession for brands? Why is it so important to be seen wearing brand name clothes and accessories? One likely reason is that nowadays many consumers, especially women, are intent on emulating their favourite celebrity in their look and style. Thus, when wearing the same outfit as the latest hot actress, they feel like they’re part of that lifestyle; they feel like they’re in!

The average person can’t afford to pay thousands of dollars for one outfit, and that’s where counterfeiters come in. Counterfeits, especially those made in China, have become very popular and, despite the efforts of customs officers, the products still manage to arrive in the hands of consumers.

When they first appeared, many people hesitated to buy these counterfeits because the products were poor in quality. But, they’ve gone a long way and today you can get them with the same brand name, the same logo and at a reasonable price.

There are even specialized stores. Take Louis Vuitton bags as an example, you have three different types of counterfeits. One type is sold in the streets of New York, the logo is butchered, the bag is made of plastic, but the look is there, and more so the price is ridiculously low. Another type, still made in China, is made of faux leather, the logo is well represented, but the clasp gives it away, it’s clearly counterfeit. The price is average.

The third type is much more successful because the bag is manufactured in Korea. The bag is leather, the symmetry and the seaming of the logo are well done, as are the accessories (certificate of authenticity, metal clasp, etc.) It is sold for more than $200 US.

Big brands have also capitalized on counterfeits. While most of their profits come from celebrities and wealthy clientele, in recent years, they’ve also gotten their share from forgeries. In the past, Wal-Mart was sued by Tommy Hilfiger for having sold t-shirts with a similar logo.

The giant chain has also been sued by other big brands for having sold counterfeit purses and other products- the list is long- and Wal-Mart is just one example. There’s a lot of money to be made from these lawsuits.

Extra precautionary measures have since been taken. Wal-Mart now requires its suppliers to ensure that at least 70% of the item is different from the original.

So what are you going to buy from now on? Lu Vivi or Luis Vuitton, Nike or Nire?