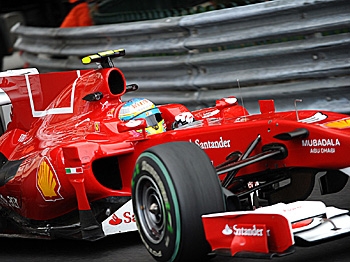 By James Fish
Print
The first two practice sessions for the 2010 Formula One Grand Prix of Monaco are in the books and surprisingly, Red Bull wasn’t fastest.

“On this track a major set up change might give you half a tenth, but trusting your driving can see you gain half a second," Alonso said on Fomula1.com. “We therefore worked on finding the right feeling with the car and on making it easy to drive.”

Of course it is only practice. Teams were testing their new Monaco-only front suspensions and aero packages, checking braking points, trying different fuel loads, and learning the changes in the circuit (new pavement in some areas, and raised curbs behind the rumble strips on Turns 11 (the Nouvelle Chicane,) and 16 (Swimming Pool.))

With all of that one certainly cannot predict the winner, let alone the starting grid, based on today’s two practice sessions. But one can make observations.

Run since 1929, the Grand Prix of Monaco is a tradition and a spectacle as much as it is a race. The home of the richest and most glamorous, Monaco is the quintessential jet-set destination, the perfect setting for a Grand Prix. The privileged few back their yachts up to the edge of the circuit to take in the race. On par with the 24 Hours of Le Mans and the Indianapolis 500, the Grand Prix of Monaco is the premier Formula One race of the season.

The course snakes through the heart of what is now a densely-developed city, its narrow roads a holdover from the days when cars, even racing cars, were significantly slower.

Monaco would never be accepted as a Grand Prix venue in today’s era of high speed, high downforce, and high safety. The course is barely two-car-widths across, with metal or concrete lining the route.

As Lewis Hamilton told SPEED-TV, “The real battle is between you and the barriers. My secret to a good lap is to touch every barrier, just to brush it. At the end of the race there should be marks on the side of all the tires.”

All the cars came to Monaco with one-off, Monaco-only front ends, designed to allow the cars to negotiate the hairpin, which is the sharpest turn in professional racing—so sharp the normal steering wouldn’t turn the wheels enough to get the cars through (imagine trying a three-point-turn every lap!)

Also, the teams use Monaco-specific wings, because top speed means very little at Monaco, and grip is everything. Ferrari went so far as to replace their brand-new F-duct bodywork with an engine cowling incorporating an extra tiny rear wing, for that added bit of stick.

Mercedes switched back to the short-wheelbase chassis favored by Nico Rosberg, albeit with a totally new front end. The setup certainly suited Rosberg, but Michael Schumacher seems to have got the handle of the shorter, understeering chassis: he was second in first practice and fifth in the last.

Coming off a fourth-place finish in Spain, Schumacher said, “Having achieved my best result so far this season, I have taken with me a lot of motivation to work even harder with our engineers to improve the car further.

“The other teams who have a certain top speed advantage on other tracks at the moment do not have this advantage here.”

Schumacher, a five-time Monaco winner, spent much of the second session finding the latest possibly braking point for the Nouvelle Chicane, missing the second half deliberately so he could see exactly how far he could push it on the first part.

The Nouvelle Chicane is possibly the only place were passing will happen in Sunday’s race, and the organizers have decided to make it a bit more difficult, by adding raised concrete sections behind the curbs the drivers most commonly ride over.

In the past it was common for drivers to ride half off the road through the chicane, making the “S”-bend into a straightaway. The addition of the obstacles—only an inch higher than the curbs, but enough to rip out the bottom of a car—should keep the drivers honest through here.

With passing at a minimum, and no refueling, qualifying becomes the key to victory. And the Red Bulls have been the kings of qualifying, earning five poles and three front-row sweeps in five races.

Further, the Red Bull is reputed to have better grip than its competitors, a huge plus at Monaco. If the cars last, one of the Red Bulls should win the race.

The Formula One Grand Prix of Monaco will start at 8 a.m. EDT on Sunday, may 16. The race will be broadcast on SPEED-TV.