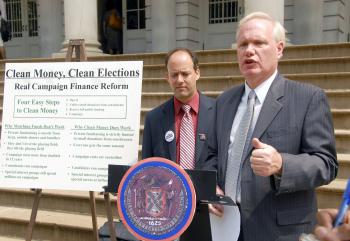 NEW YORK—City Councilmember Tony Avella will introduce legislation that will change the way public office candidates fundraise for their campaigns.

To be introduced at the Wed., July 23 council meeting, the Clean Money, Clean Elections bill would eliminate the petition process and large corporate and special interest donations that may sway politicians’ campaigns.

Under the proposed system, a candidate would collect $5 donations from constituents in their district. When the candidate reaches the donation threshold, the amount of which will depend on the level of office they seek, will be eligible for public funds. Each candidate will get the same amount, reducing campaign costs, which have more than doubled in twelve years.

An aggregate of campaign funds of 14 potential candidates for city office showed that over 96% of their funds come from donations of over $175, according to the New York City Campaign Finance Board. Donations over $175 may not be counted towards the dollar amount requirement to qualify for public funds.

The legislation would not impact the mayoral elections in 2009, but would take effect in 2010 if passed. Candidates who finance their own campaigns would still be able to do so, according to Avella.

Maine, Arizona, and Connecticut already employ a similar system on a state level.